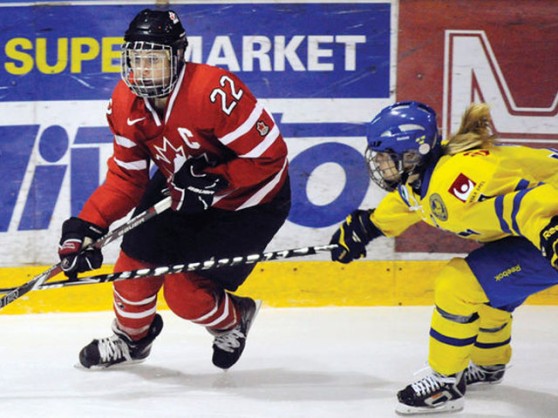 Canada’s National Women’s Team will enter the championship game at the 2012 Four Nations Cup on a high after closing out an undefeated round robin with a 9-0 rout of Sweden on Friday at Valtti Areena.

“It’s always nice when you score a bunch of goals,” head coach Dan Church said. “It gives the forwards some confidence. I think on the back end, it was a good performance by our (defence) and goalie to get the shutout.

“Overall, a great way to head into tomorrow.”

Canada will play the United States in the title match while Sweden and Finland play for Bronze.

The Canadian roster includes almost all the players from the team that won Gold at the 2012 IIHF Ice Hockey Women’s World Championship last spring. Canada beat the Americans 5-4 in overtime in the championship game.

Church likes that his team is playing with confidence.

“I think the players have really battled hard,” he said. “Just the consistency in their approach to the little details in the game I think has made a big difference for us.

“Things like our physical play, backchecking and just the commitment by everybody to play for their role in whatever role they’re given for that game. I think they’ve all done a great job of that.”

Canada last won the Four Nations Cup in 2010, defeating the Americans 3-2 in overtime in St. John’s, Newfoundland. The United States beat Canada 4-3 in a shootout in last year’s final in Nyköping, Sweden.

“I think the players are ready. They’re ready for the challenge of regaining the Gold medal at this tournament,” Church said.

Canada has won this event 12 times over its 16-year history. The tournament also serves as an evaluation opportunity for team brass ahead of the 2013 IIHF Ice Hockey Women’s World Championship in Ottawa this April.