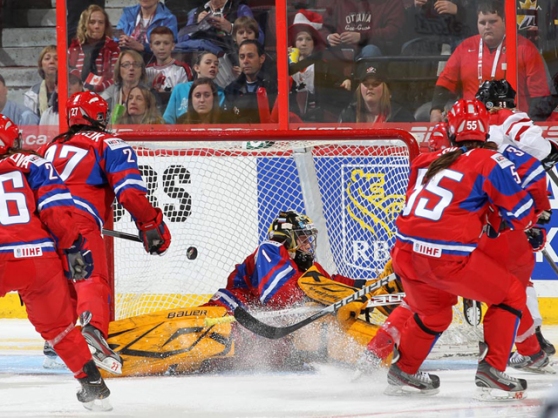 Canada broke open a close game with five goals in the second period en route to an 8-1 win over Russia. Canada will now face the U.S. for gold while the Russians and Finns will play for bronze.

Marie Philip-Poulin scored twice to up her tournament leading total to seven goals.

“You never take any team or game for granted in a tournament like this, so we’re happy with how tonight went and now we can focus on the gold-medal game,” said Canadian forward Jayna Hefford.

The first period was eerily like the first 20 minutes of the afternoon game between the United States and Finland. In that game, the Americans were dominant but couldn’t score. Tonight, Russian goalie Anna Prugova was sensational, but finally with 46.1 seconds left Haley Irwin broke the scoreless deadlock.

Meaghan Mikkelson brought the puck around the net and found Irwin in front. She managed only a weak shot, though, but instead of waiting for the puck to hit her, Prugova tried to poke the puck away. She whiffed on it, and the puck slid between her pads and over the goal line. Goalie Shannon Szabados also drew an assist on the play, the first of her Team Canada career.

Shots were 20-4 for Canada in the period (Meghan Agosta-Marciano accounting for five of that number), fully indicative of the team’s puck possession and territorial advantage, but the more important number saw Canada with a 1-0 lead. The Russians, while of little offensive threat, played a physical game and skated as well as any Russian team of years past.

That’s where the similarities to the afternoon game ended. Canada scored three goals within a minute early in the second to take a commanding 4-0 lead. First, Natalie Spooner’s bad-angle shot went over Prugova’s shoulder and dribbled over the line. Then, Prugova couldn’t control a routine shot from Brianne Jenner, and Marie-Philip Poulin knocked in the rebound.

Coach Mikhail Chekanov called a time out to settle his troops, but the breather couldn’t improve Prugova’s play. A minute and a half later, Jennifer Wakefield blew a long shot past her to the far side to put the game more or less out of reach.

“We just kept playing hard, and the pucks eventually started going in,” said Rebecca Johnston. “The first period was good, but we needed time to get that first goal.”

The Russians managed to make it 4-1 at 10:56 when a Svetlana Tkachyova point shot fluttered through traffic past Szabados. It was the first goal Canada had allowed in 192:02, a stretch going back to the first period of the first game against the U,S. last Tuesday.

That marker was quickly erased by two more goals from Canada. Jayna Herfford’s long shot eluded Prugova, whose excellent play in the first was now but a distant memory. Then, Poulin got her tournament-leading seventh goal to make it a 6-1 game.

Third goalie Yuliya Leskina started the third in goal for the Russians, and her first appearance of WW 2013 was christened by goals from Agosta-Marciano and Rebecca Johnston in the first three minutes.