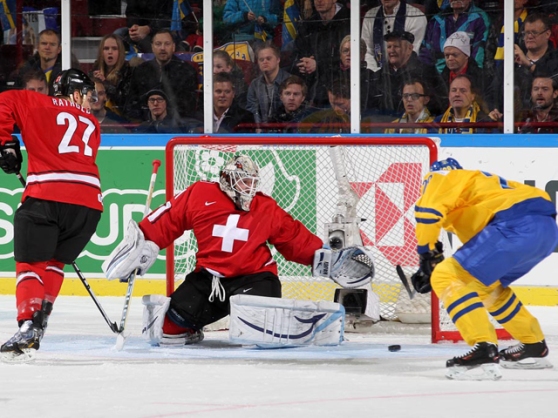 The game was full of energy on the ice and in the nearly sold-out stands, but Forsberg’s play suggested many great days ahead for Tre Kronor and in the NHL.

“We’ve had trouble with Switzerland for three years now,” admitted forward Oskar Sundqvist. “We can’t just go out there and hope to win. We have to make it happen as a team. And we did.”

Four goals of the five goals in the opening period were scored in a burst early on in under three minutes. The Swiss got on the board first on the power play when Yannick Rathgeb threw a light but quick shot at the net. In the ensuing scramble, Sandro Zangger managed to shovel the puck in at 5:43 to silence the raucous crowd.

Just 71 seconds later, though, the home side tied the game. Forsberg made a great rush and drew a penalty, but after losing the puck he made his way to the point and ripped a great one-timer past a stunned Melvin Nyffeler in goal.

Undaunted, the Swiss continued to press and were rewarded thanks to a sloppy line change with play in the centre-ice area. Vincent Praplan controlled the puck and created a three-on-two, and Kevin Fiala finished the play with a nice deke on Oscar Dank.

“I got a pass and was going to shoot, but I took a quick look at the goalie and saw he was well out of his net. So I faked it and scored on a backhand.”

Twenty-one seconds later, the Swedes tied the game for a second time. Zangger made a terrible pass along the boards in his own end, and Erik Karlsson was there to collect the puck. He got the puck quickly to Lukas Bengtsson, and he made it 2-2.

The Swedes took their first lead at 17:19 on another sensational play by Forsberg. He danced off the corner boards, feathered a pass to Sundqvist at the back side of Nyffeler’s goal, but was robbed by an incredible save by the goalie. No Swiss defender checked Sundqvist, though, and he backhanded the disc into the open net past a helpless goalie.

Although the second period was without goals, it was by no means without excitement. Karlsson made a great rush up the middle only to hear his wicked wrist shot clang off the crossbar over the beaten shoulder of Nyffeler, and later in the period Flavio Schmutz had a great chance from close in but Dansk could not be deked on the play.

Sweden might have increased its lead when it had a four-minute power play thanks to two poor penalties by Fiala on the same play, but the Swiss penalty killers rose to the occasion.

The Swedes controlled the play for the last several minutes, but after two periods the game’s outcome was still very much in doubt.

Just 61 seconds into the final period, the Swiss tied the game on another power play. A wicked shot from the point created chaos in front, and Fabrice Herzog finally knocked the loose puck in to make it 3-3.

But as in the opening period, the Swedes had a quick answer, this time in a point shot of their own that beat a screened Nyffeler cleanly. Christian Djoos was the scorer.

“We weren’t worried when they scored,” Sundqvist said. “Our thoughts the whole time was to get a fourth goal, so it didn’t matter when they made it 3-3.”

The Swiss had a late power-play opportunity to get the tying goal, but after they failed to do so Andreas Johnsson made it 5-3 thanks to a nice steal by Wennberg behind Nyffeler’s cage.

“I think I have pretty good chemistry with Johnsson. I just try to put the puck on his stick. We played well in their zone,” Wennberg said, “but we need to play better in our own end. We made too many mistakes.”