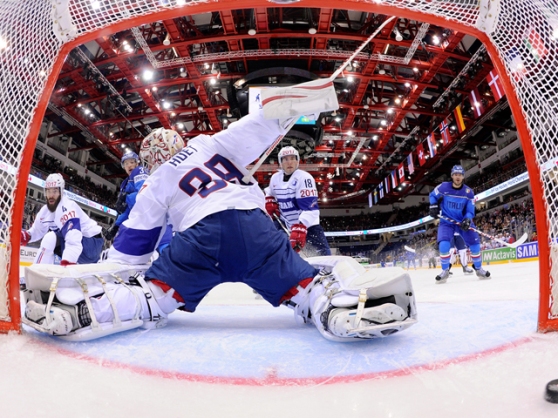 In what both teams had labelled as a key game in Group A play, Italy beat France 2-1 after Markus Gander scored with less than one minute remaining.

“It’s for sure one of the most important goals I’ve scored,” said Gander. “I’m just happy now that we won that game and got the three points. (Daniel) Tudin got the puck and he just went straight to the net. He crashed into the net and the puck just bounced on to my stick. I didn’t even look. I just shot the puck and it went straight in.”

“It’s obviously disappointing and we missed a lot of good opportunities,” said France’s Head Coach Dave Henderson. “They had great goaltending and played with a lot of heart, but so did we. We just came out on the wrong end this time.”

“Our goalie was huge today,” stated Gander. “He made a few saves in the first period that were unbelievable and he was the main reason we won today.”

While France had the better scoring chances on even strength, special teams played a key role in the game. Italy scored once on the power play and killed off five French opportunities, including a two-man disadvantage that lasted almost two minutes.

“The key to the game was the 5-on-3 penalty kill,” said Italy’s head coach Tom Pokel. “We had great goaltending and great effort by the guys out there who really sacrificed their bodies. It was great to get our first win and get our confidence going.”

France got on the board eleven minutes into the second, when Meunier accelerated in the neutral zone, picking up a pass from Julien Desrosier. He pushed himself towards the Italian net on a partial break-away and found the net through Bellissimo’s five-hole giving France the 1-0 lead.

Less than three minutes later, Italy was awarded a man advantage and put heavy pressure on France, eventually tying the game as Giulio Scandella’s shot from the middle of the slot found the back of the net. Trevor Johnson and Diego Kostner had the assists.

In the third, France put on the pressure, forcing Italy to rely mostly on the counter-attack. France came close to getting the important win when Baptiste Amar hit the post with 13 minutes remaining.

Instead, it was Gander and Italy that got the last word.

“It’s hard,” said France’s goaltender Cristobal Huet. “This is the game we targeted before the tournament to win, not the Canadian one. For us, it’s a tough loss. But there are five games left in the and we’re going to have to get some points somewhere else.”