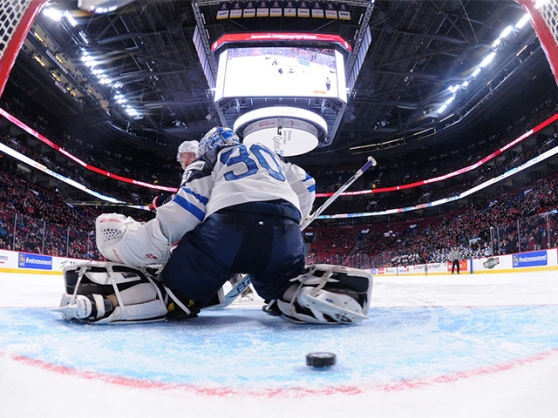 Chase De Leo scored the shootout winner as the United States beat Finland 2-1 to kick off the 2015 IIHF World Junior Championship in Montréal on Friday.

It was a great goaltending duel for the fans at the Bell Centre.

American goalie Thatcher Demko, who was on the roster in Malmö 2014 but did not play, recorded 28 saves through overtime, and stoned Pittsburgh Penguins prospect Kasperi Kapanen in the shootout to clinch the win.

“I thought we got better as the game went on,” said Demko. “It’s a good starting point, and something we can work forward from.”

Finnish netminder Ville Husso made 36 stops through overtime. He somewhat surprisingly got the start over Juuse Saros, who recorded a 1.57 GAA and 94.3 save percentage in six games en route to a tournament all-star berth last year. Husso, the starter for IFK Helsinki, has been a little better than Saros, the number one goalie for HPK Hameenlinna, in Liiga play this season.

“(Goalie coach Miikka) Kiprusoff told me that I’d play,” said Husso, the 2014 backup. “We talked about it maybe three days ago, but yesterday, they (confirmed) I’d play.”

Finland, which defeated Sweden in last year’s final on Rasmus Ristolainen’s overtime goal, is looking to win back-to-back Golds for the first time in World Junior history. The Americans are seeking their third Gold in six tournaments (2010, 2013).

In regulation, Alex Tuch tallied for the Americans, while Mikko Rantanen scored for the Finns.

U.S. captain Jack Eichel, widely touted as the top rival to Canada’s Connor McDavid as a potential #1 overall pick in the 2015 NHL Draft, had one assist. He also put home the first American shootout attempt.

“We knew it was going to be a tough game,” said Eichel. “They’re the defending champs, and you’ve got to give them a lot of credit. They played a very close-checking game. It’s really good for us to get the win. Hopefully we can build off that and get some confidence.”

The game got off to a scrambly start, and Finland scored on its first shot at 1:22, getting a flukey goal.

After Demko gave away the puck on a miscue behind the goal line, Rantanen tried to centre it and it went in off the left leg of American forward Auston Matthews. (Demko is a Vancouver Canucks prospect, and the sequence was reminiscent of the difficulties another former U.S World Junior and Canucks goalie, Cory Schneider, sometimes has when handling the puck behind the net.)

Tuch tied it up with a beautiful power play goal at 13:54, waiting in the slot to convert a deft backhanded feed from Eichel. Eichel turned 18 on 28 October, and is the youngest U.S. World Junior captain since Bryan Berard in 1996.

“Jack’s a very mature kid and he’s a leader,” said U.S. defenceman Noah Hanifin. “I think all the guys are looking up to him.”

Carrying the play, the U.S. nearly went up 2-1 on a mid-second period power play as Sonny Milano zinged one off Husso’s right post.

Defenceman Julius Honka, the only player on Finland’s roster with NHL experience, danced through the U.S. checkers on a solo rush and nearly scored with less than five minutes remaining in the second.

Rantanen had a great chance for his second goal of the afternoon in the last minute of the period when defenceman Anthony DeAngelo’s stick blew up in the U.S. zone. But the big TPS Turku winger couldn’t stuff the puck past Demko when he cut to the net.

With 6:22 left in the third, Husso made a fantastic close-range glove save on Tuch to keep the score even.

Tempers flared as Honka and Eichel tussled behind the Finnish net and went off with coincidental roughing minors late in regulation. “That’s how the game goes,” Honka said. “There’s a lot of passion in it.”

Husso foiled Nick Schmaltz on a lightning rush just before the end of the third, but Alex Lintuniemi took a cross-checking penalty on the sequence, giving the Americans a 4-on-3 advantage to start overtime. But the Finns weathered that storm.

The Americans have five players returning from last year’s fifth-place squad. Nineteen-year-old defenceman Steven Santini was expected to come back in a prominent role, but a nagging hand injury made him the last roster cut. Finland has six returnees.

The U.S. has now won five out of the last six meetings between these two nations. Finland won 4-1 the last time they faced off at the World Juniors on 28 December 2011. Overall, Finland leads the U20 series with 16 wins, one tie, 11 regulation losses, and three losses in extra time.

“We know we have a good team and we can battle with the big countries here,” said Honka. “If we play like that and keep going and get better, good things will happen.”

Finland faces Slovakia next on Saturday, while the Americans take on Germany on Sunday.