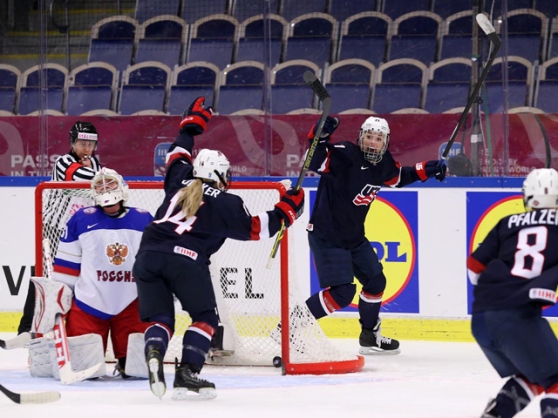 Brianna Decker and Hilary Knight combined for six first-period points to spark the U.S., the defending World Champions, to a 13-1 semi-final pounding of Russia.

This will be the sixteenth straight appearance in the finals for the American women. They will face the winner of the Canada-Finland semi-final.

“The game was good,” said Decker. “I think we moved the puck really well and prepared ourselves for tomorrow’s game, regardless of who we play.”

Decker, wearing the C with captain Meghan Duggan sitting out due to illness, finished with a hat trick and added an assist. Hilary Knight had a goal and two assists, and she and Decker are now tied for the tournament scoring leader (10 points). Monique Lamoureux had a goal and three assists.

Iya Gavrilova had the lone goal for Russia.

“We didn’t want to get so many goals scored on us,” Gavrilova said. “You never want to get scored on. So of course, we’re a little bit disappointed.”

Coach Ken Klee’s troops were anticipating another thrilling showdown with archrival Canada, whom they’ve faced in all the gold medal games since the tournament’s 1990 inauguration.

“I think it’s huge for us to have a couple more hours to do recovery and everything,” said Decker. “But regardless, we’ve just got to focus on ourselves and bring our A game tomorrow.”

Probably not too many of the Russians are familiar with the 1970 Guess Who hit “American Woman,” but after a second straight shellacking against the U.S., they could echo its sentiments: “American woman, stay away from me.”

This game was even more lopsided than the 9-2 U.S. romp over Russia in the preliminary round.

The Americans, who earned a bye to the quarter-finals, took a train trip from Malmö to nearby Copenhagen during their time off, and fittingly, they approached the semi-final with the speed and power of an oncoming train.

“You’ve got to go out there and compete,” said Knight. “Every game’s a new game. You treat it as a one-game series.”

Goaltender Jessie Vetter played two periods before being relieved by Alex Rigsby for the Americans, who outshot Russia 50-8. Yulia Leskina started the game between the pipes for Russia, but she was yanked in favour of Valeria Tarakanova to open the second period.

Despite the loss, the Russians will still get a chance to seek their second consecutive Women’s Worlds bronze and third all-time dating back to 2001. In Ottawa 2013, they beat Finland 2-0 in the bronze medal game under coach Mikhail Chekhanov and then-GM and ex-NHL star Alexei Yashin.

The Russians surprised everyone by drawing first blood just 44 seconds in. Aggressive forechecking by Olga Sosina on blueliner Emily Pfalzer resulted in a turnover inside the U.S. blue line, and Gavrilova stickhandled in to tuck a backhander past Vetter.

But the good times didn’t last long for the Motherland.

Halfway through the first period, Decker tied it up, taking a nice centering feed from Knight and zinging a shot that bounced off Leskina into the top corner glove side.

On the power play at 14:14, Decker put the Americans up 2-1 on a nice give-and-go with Kendall Coyne.

Just 18 seconds later, Monique Lamoureux’s slap shot from the point, set up by Decker and Knight, made it 3-1. Leskina got a piece of it but not enough.

At 17:58, Knight tipped in another point blast for a 4-1 lead, putting the game firmly out of reach for Russia.

Russia changed netminders to start the second period, but it didn’t make any difference as Trivigno banked one in off Tarakanova’s leg from behind at 3:40 with the man advantage.

It only took another nine seconds for Alex Carpenter to come down the middle and whip a wrister home for a 6-1 gap.

Near the midway point, Brandt shoveled home a rebound for the seventh American goal. After a Russian turnover, the Americans moved the puck around nicely and Skarupa capitalized from the slot to make it 8-1 at 12:20 on the power play.

Jocelyne Lamoureux took a deft pass from her sister Monique on the 9-1 goal at 14:26, and with 55 seconds left, the puck deflected in off a Russian defender to make it 10-1, the goal going to Pfalzer.

At 8:56 of the third, Hickel was allowed to circle the Russian net and lift one home. And 22 seconds later, Keller’s shot caromed past Tarakanova to make it 12-1.

Decker rounded out the scoring for the Americans with 5:57 left, completing her hat trick.

“We have a lot of experience under our belt,” said Decker. “We have a lot of older players, and the rookies are playing like veterans right now, and that’s what we need. And that’s how we’re going to be successful tomorrow.”

Like Duggan, veteran U.S. blueliner Kacey Bellamy sat out this game, feeling under the weather. Both are expected to play in the final.