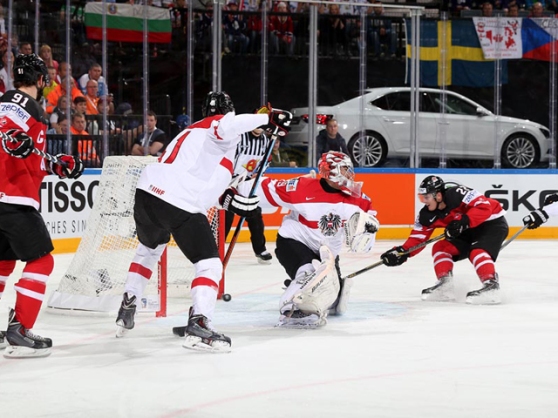 Canada scored early and often to finish the round robin with a perfect 7-0 record and 49 goals scored. Canada played the game without incurring a penalty.

Matt Duchene and Jason Spezza led the attack with two goals and two assists each. As a result, they now tie Oliver Ekman-Larsson atop the points leaderboard with eleven. Jordan Eberle, with a goal and assist, is one back in the overall race with ten.

“It’s been all sorts of guys that have been scoring lots of goals and getting lots of points in this tournament,” Duchene said. “Everybody’s contributing pretty equally. That’s a really good thing, the sign of a good team.”

Defenceman Dan Hamhuis took Crosby’s place as captain. Number 87 was given an extra day of rest in preparation for the playoff round.

“It’s an honour, for sure,” Hamhuis said of wearing the “C”. “I mean, it’s an honour first of all to put this jersey on and represent the country. I’ve had some big shoes to fill for Sid, but we’re hoping he’s back next game.”

Canada will play Belarus in the quarter-finals in Prague.

The Austrians now sit and wait for the result of the Latvia-France game to know their fate. If France wins in regulation time or if Latvia wins in any manner, Austria will stay up and the loser of the other game will be relegated. If France wins the game in overtime or shootout, Austria will be demoted.

Canada scored the only four goals of a first period which featured tic-tac-toe passing and a confident puck movement. The opening goal was a lovely three-way passing play. Claude Giroux brought the puck in, dropped it for Ryan O’Reilly who in turn put it on the tape of Tyson Barrie dashing to the net. Barrie merely had to re-direct the pass into the open back side.

Jake Muzzin made a nice play on the second goal. He kept the puck in the Austrian zone and fired a shot that Bernhard Starkbaum couldn’t handle, and Duchene knocked home the rebound.

Brent Burns’s point shot was deftly tipped by Taylor Hall at 11:17 to make it 3-0, and then Austria had its finest moment of the period. Dominque Heinrich and Tyler Seguin chased after a loose puck in the centre-ice area, and it was Heinrich who showed an incredible burst of speed to create a breakaway. Mike Smith made a nice save on the shot, though, and to make matters worse Canada brought the puck back and scored. Instead of 3-1, it was 4-0.

Ekblad took a nice pass from Eberle and wired a shot past Starkbaum on the stick side.

Canada added two more easy goals in the second. Duchene set up Spezza with a deflection from the top of the crease at 1:58 and Burns made a nice pass to Eberle. The man with the soft hands took the pass and waited for Starkbaum to over-commit before flipping the disc into the cage.

The teams combined to scored three goals in 21 seconds early in the third, not quite a record (15 seconds URS and SWE, 1975), but fast enough. Heinrich scored when Smith flubbed an easy shot, and then Canada struck twice. First Nathan MacKinnon and then Spezza.

Brayden Schenn, playing in only his second game of the tournament, added another after René Swette had replaced Starkbaum, and Duchene got a tenth goal at 14:43.