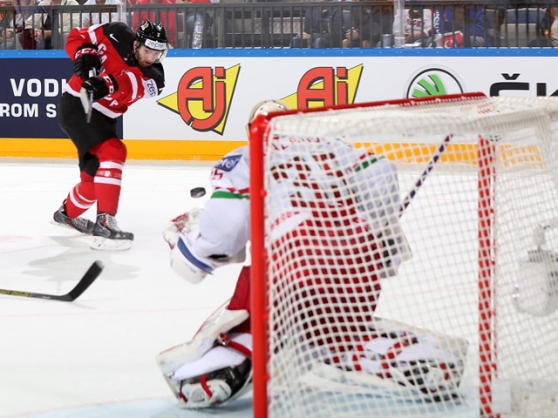 It wasn’t one thing. It was everything. Relentless puck pressure. Dominant puck movement. Tenacious defence. Finish around the goal. Tyler Seguin hat trick.

Jason Spezza had a goal and assist and now is the tournament’s leading scorer with 13 points. Five of the top seven scorers are Canadian.

Canada scored in the first minute, added three more goals later in the opening period, and cruised to a 9-0 win to advance to its first semi-finals since 2009.

“I thought it was great,” said O’Reilly. “Sometimes we don’t start the way we wanted to, and today I felt we did exactly what we wanted to. We came out and had great intensity. We started right away. We held on to the puck. We were working together, and again, Smitty played a great game. It’s something that we’re definitely proud of, but we have to get ready and focus on the next game.”

Canada has now scored 58 goals in eight games, the most since it scored as many in 1962.

Canada will play the winner of tonight’s Finland-Czech Republic game for a place in the gold-medal game. Belarus goes home with its second straight 7th-place finish.

“It feels good,” said Tyler Ennis of the winners. “We’re committed. A lot of guys came over, which is great to see, playing for our country and trying to win a gold medal. We’re determined.”

“It’s nice to put ourselves in a position to get to the finals,” said captain Sidney Crosby. “That’s the important thing, to get better every game. At this point, you’ve got to be at your best. It’s win or go home. We did a good job today.”

The first goal started with a turnover in centre ice and finished with Crosby making a nice pass to Burns coming in off the blue line. The defenceman wasted no time in wiring a shot over the glove of Kevin Lalande just 27 seconds into the game.

Canada made it 2-0 at 7:36 when Tyson Barrie spotted Tyler Ennis in front, and Ennis converted the close-in chance. Two and a half minutes later, Burns made a sensational play, taking a slap-pass beautifully redirected in front by O’Reilly.

Seguin capped off an intimidating period by blasting a slapshot from the top of the circle on the power play for his first of the night. Shots were 20-3 and were clear indication of the one-sided play.

Canada tacked on two more in the second, but Belarus did create a few good chances of its own. Seguin scored his second after several minutes of dominant play in and around the Belarus goal, wiring a shot past a beleaguered and frustrated Lalande at 3:23.

The Canadians also incurred their first penalty of the game in the second, ending a streak of 88:33 without a single trip to the penalty box.

Burns got his second of the night off another point blast, this time on a power play. But on another man advantage a Crosby pass ended in centre ice and Yevgeni Kovyrshin scooped it up to create a to-on-one with Alexander Kulakov. Kulakov got the pass but Smith made a fine save off the clear break.

Seguin added his third goal in the third along with Ryan O’Reilly with his second. Spezza potted the ninth of the night at 15:19.

Smith made his best save midway through with a sensational right pad save off a back-door chance by Sergei Drozd, who shook his head in disbelief as he skated to the bench.

Interestingly, Seguin scored his first regular-season NHL goal in this arena, on October 10, 2010, in a 3-0 win over Phoenix. And now today.

“I don’t know! Someone’s blessing me here in this arena,” he responded. “I think for me personally, I started off the tournament not getting bounces. I’m obviously more happy when they go in. We’re not the team that started out back in Vienna and Austria some 20 days ago. We’ve gotten better every day. We’ve grown as a team. We’ve come together, and we’re going to try to continue doing that.”