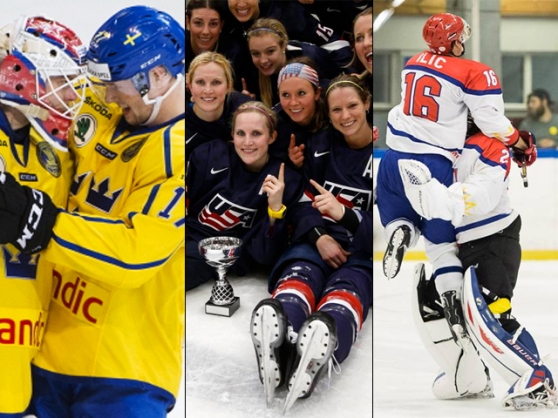 It was a busy first weekend break for international hockey this weekend, with a number of key tournaments in both men’s and women’s hockey taking place, including 2018 Olympic qualifiers and the women’s International Hockey Lineal Championship up for grabs.

Below is a brief recap of the key tournaments taking place this weekend:

Four Nations Cup, Sundsvall 🇸🇪 – For the 18th time in its 20 year history, Canada and the United States faced off in the Gold Medal Game. However, in a reversal of Canada’s 3-2 shootout win at last year’s final exactly one year earlier, Hilary Knight was sprung for a breakway and scored just 36 seconds into overtime to win the game 3-2 for Team USA, capturing their sixth Four Nations Cup title (and guaranteeing they carry the IHLC into 2016, for next year’s World Championships in Kamloops, Canada).

Men’s Olympic Qualification Preliminary Round, Tallinn 🇪🇪 / Valdemoro 🇪🇸 – Estonia captured the Group K title on home ice, crushing Bulgaria, Israel and Mexico by a combined score of 58-4 to advance to Group H of Pre-Qualification in February, facing Hungary, Lithuania and Poland. In Spain, meanwhile, Serbia upset the host nation to win Group L (also featuring China and Israel), to book their spot in Group G against Great Britain, Italy and the Netherlands in February.

Karjala Tournament, Helsinki 🇫🇮 – Border rivals Sweden and Finland met with the tournament’s Cup on the line, with Linus Omark’s late power play tally holding up as the winner in a narrow 3-2 victory. Viktor Fasth stopped 27 of 29 to send the Helsinki faithful home disappointed, giving Sweden the early lead in the 2015-16 Euro Hockey Tour.

Deutschland Cup, Augsburg 🇩🇪 – The final matchup between the United States and hosts Germany ended up being the unofficial championship game, and a pair of goals from David Wolf, paired with a solid performance by Felix Brückmann in net, led the Träger der Adler to a 5-2 win to capture the 2015 Deutschland Cup.

Euro Ice Hockey Challenge, various – In the first round of tournament play for the season, four separate groups took place in Norway, Latvia, Poland and Romania. Norway, Belarus, Slovenia and Ukraine came out victorious in their groups to open the tournament, which will reconvene next month in Katowice, Poland.