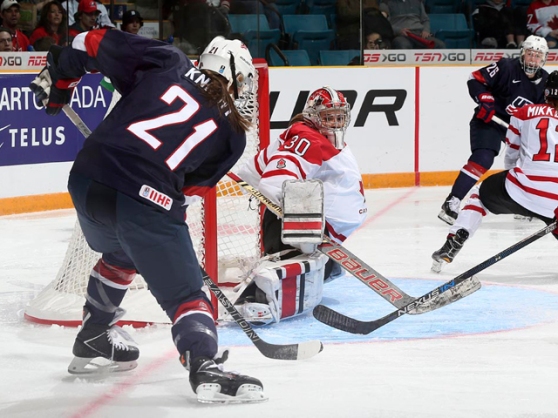 The defending champion U.S. bounced back to beat Canada 3-1 in an exciting first-day showdown between the likely finalists at a sold-out Sandman Centre.

Hilary Knight scored twice and Brianna Decker had the winner for the Americans. Knight and Decker finished 1-2 in tournament scoring last year.

“We stuck to it, focused on ourselves, and put ‘em in when it counted,” said Decker.

Laura Fortino replied for Canada, which drew first blood early in the third period but couldn’t hold on to the lead.

The Americans have won six out of the last eight Women’s Worlds, but Canada is the reigning four-time Olympic champion. The U.S. defeated Canada 7-5 in the 2015 gold medal game in Malmö, Sweden. So there was plenty of pride on the line. It was a hard-fought but clean game.

“It was a good start to the tournament,” said the U.S.’s Monique Lamoureux. “Obviously it was a little bit sloppy for us, not connecting on some passes and some turnovers. We’ll want to eliminate those down the road in the tournament. But you win games in different ways.”

As has become the norm between the North American archrivals in recent years, the U.S. had better wheels and puck movement overall, but Canada countered with its tenacious, never-say-die attitude.

“It’s always disappointing getting a loss, especially against the U.S,” said Maschmeyer. “It doesn’t feel good, but it gives us motivation to get them back again.”

The Americans enjoyed the territorial advantage in the first period. Maschmeyer was tested from every angle during a U.S. two-man advantage that lasted over a minute.

“The big positive to take out of this game is that we killed off two 5-on-3’s,” said Fortino. “We were dominant all game. Moving forward, I think we’re really going to believe in our special teams.”

In the second period, the torrid pace continued. Rigsby slid across to make a great save on Brianne Jenner’s one-timer off the rush. The U.S. came close to taking the lead off an Anne Pankowski near-breakaway.

The third period was hell bent for leather. The partisan red-and-white crowd at the Sandman Centre was loud and excited.

Fortino put Canada on the board 14 seconds in on the power play. Natalie Spooner and Meghan Agosta had come within a hair’s-breadth of scoring during a goalmouth scramble. Fortino snared the puck above the hash marks and whizzed it over a prone Rigsby.

“I feel like I assisted on their first goal,” said Monique Lamoureux. “I passed it right to (Fortino). But I thought we bounced back and played well.”

Just past the four-minute mark of the third period, Maschmeyer made a stellar glove save on the U.S.’s Dana Trivigno to maintain the lead. Krzyzaniak nearly put Canada up by two when she put one off the crossbar moments later.

Halfway through the third, Knight burst into the Canadian zone on the left side and unleashed a wrister that tipped off Krzyzaniak’s stick and over Maschmeyer’s glove to tie it at 1-1.

With 6:05 left, Decker gave the Americans the lead, pouncing on the rebound from a Monique Lamoureux drive in the slot and capitalizing.

In the dying moments, the Canadians pulled Maschmeyer for a sixth skater and used up their timeout, but to no avail. Knight added an empty-netter with 20 seconds left.

“We’ve just got to find a way to put the puck in the net more 5-on-5, and continue to work on building off the momentum we generated on our kill there,” said Canadian coach Laura Schuler.

“I think we came in with the mindset that we need to get better,” said U.S. coach Ken Klee. “And obviously we’re pleased with the win, but we can certainly improve in a lot of areas.”

The game saw the return of three famous Canadian veterans who did not play at the 2015 tournament: forwards Hayley Wickenheiser and Meghan Agosta and defender Meaghan Mikkelson.

On Tuesday, the Americans will face Finland, while Canada takes on Russia.