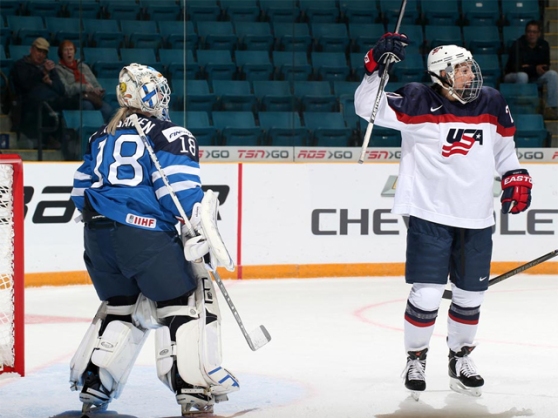 Persistence pays off. The U.S. proved that by outshooting Finland 51-7 in a 2-1 win on Tuesday at the Sandman Centre.

Hilary Knight and Jocelyne Lamoureux-Davidson scored for the defending champion Americans, who maintained their perfect record after beating host Canada in the opener on Monday.

“Obviously, we got off to a slow start, but to come out with a W is huge,” said Knight.

“There were a lot of shots,” said Räisänen. “It’s always like that. I think we played maybe the best game ever against the USA.”

The U.S. could have scored more, but seemed a little sluggish after yesterday’s barn-burner. It wasn’t a highlight-reel peformance, but it was another three points for coach Ken Klee’s crew.

The Finns, who won bronze last year, drew first blood on a nice 2-on-1 rush at 5:03. Riikka Välilä (née Nieminen) slipped a sweet, short feed over to Karvinen, who beat U.S. goalie Jessie Vetter with a backhand deke.

“Me and Riikka have a great chemistry,” said Karvinen. “I knew I was going to get the puck back, and I went backhand over the pad. It felt good to get a one-goal lead.”

Despite being outplayed by the stronger, more skilled Americans, Finland looked set to head to the dressing room with the lead. But Knight spoiled those plans. Standing in front of the net, she tipped in her third goal of the tournament off Lee Stecklein’s wrister from the left point to make it 1-1 at 19:02.

Räisänen, a tournament all-star in 2015, had to stay sharp as the U.S. fired away from all angles in the first. She made a great save on NCAA scoring ace Kendall Coyne’s breakaway.

The bombardment continued in the second period, with the Americans outshooting Finland 20-1. At 15:09, Lamoureux-Davidson scored from the low slot to put the U.S. up 2-1.

Räisänen did her best to keep her team in it, stopping Dana Trivigno’s in-close deke with 1:34 left before the second buzzer.

But it wasn’t enough in the end. The Finns had a golden opportunity to tie it with about six minutes left, as Karvinen set up Petra Nieminen, but Vetter made her best save of the night. Rosa Lindstedt took an interference penalty with just over a minute remaining, killing Finnish hopes of an equalizer.

The main concern for the Americans thus far might be that they’re not filling the net at their usual rate. Last year, they had 37 goals in just five games. Still, given that they’ve just faced the two other teams who medaled last year in Canada and Finland, there’s likely more scoring to come.

“We had a great, hard, physical camp and came here and had two hard games,” said Knight. “We just need to make sure our minds are set the right way and our bodies are healed up and ready to go.”

The Americans entered this game with a record of 13 wins, one tie, and one loss against Finland. The only Finnish win was a 1-0 overtime victory at the 2008 Women’s Worlds in Harbin, China on April 8, 2008. Heidi Pelttari scored there in sudden-death.

On Thursday, the U.S. will take on Russia, while Finland faces Canada to round out the Group A slate.

“We have a chance to go straight to the semi-final,” said Karvinen. “We know we’re really good as a team. We have a really great system, which makes it hard for the top teams to play against us. We need to continue like this, but keep the puck within the team and not give it away. Otherwise, we’re not going to get any goals. But we’ll see. Anything can happen.”