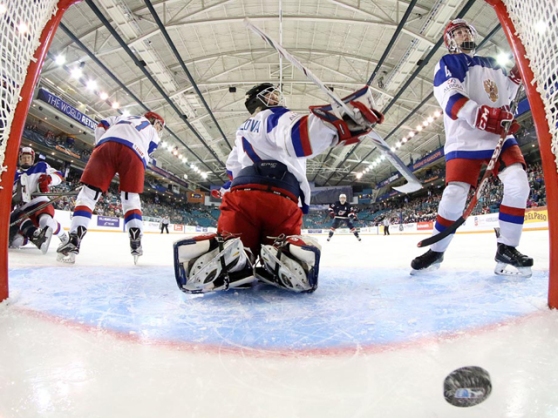 The U.S. scored five first-period goals in a 9-0 semi-final romp over Russia at the Sandman Centre on Sunday. The defending champions will play for gold again.

Like last year, the Americans will take on the winner of the Canada-Finland semi-final, while Russia will face the loser for bronze.

“Obviously any time you can get a big win in the semi-finals, it gives you a lot of energy and fire going into the final,” said U.S. captain Meghan Duggan.

“I think we look forward to playing in the gold medal game,” said Stack. “It’s what we work for so hard all year long. We’re super-prepared and ready to go. It’s just going to be a lot of fun.”

“The biggest thing for me was just taking it one shot at a time and making sure I was focused the entire game, playing my game,” said Rigsby. “Also, we made sure we were doing extra communication out there among the defence.”

Coach Ken Klee’s offense is firing on all cylinders heading into a likely rematch with archrival Canada. The U.S. has racked up 22 goals in four games in Kamloops.

“I think this is maybe the best game of the tournament we’ve played,” said Klee. “Our pairings on D were working well together. Our forwards were all reading off each other. We had a lot of one-touch passes today to open players, and we gave ourselves a lot of great looks.”

They’re air-tight defensively, allowing just two goals in total so far. The last one was by Michelle Karvinen at 5:03 of the first period during Finland’s 2-1 loss on Tuesday.

The Americans have won six out of the last eight IIHF Women’s World Championships. Every final since the inaugural 1990 edition has pitted them against Canada.

“You look at how close we are with whoever our opponents are,” Klee cautioned. “We had a close game with Finland. We had a good game with Canada. Either way, it should be a great hockey game.”

The Russians weren’t expected to win the semi-final, but were disappointed about not giving the U.S. more of a fight. At least superficially, not much has changed since last year’s semi-final, where the Americans thumped them 13-1.

Now the focus must shift to winning Russia’s third bronze of all time. They previously took that medal in 2001 and 2013.

The U.S. opened the scoring at 6:59. A forechecking Monique Lamoureux grabbed the puck behind the net and centered it to Stack, who made no mistake.

“I think we just needed to get the puck in deep and start working the cycle, shooting pucks where the goalie’s not,” said Stack.

Just 37 seconds later, it was 2-0. Shiann Darkangelo backhanded the puck to Jocelyne Lamoureux-Davidson, who stickhandled past a forest of Russian defenders and beat goalie Anna Prugova along the ice from the right faceoff circle.

Clearly, it wasn’t Russia’s day. Bozek’s point drive was accidentally tipped over Prugova’s shoulder by a Russian defender to make it 3-0 at 10:31.

At 11:20, Knight powered home a loose puck, and it was 4-0. Knight has led this tournament in scoring twice (2011, 2015). The Russians made the token gesture of pulling Prugova in favour of Nadezhda Morozova.

The U.S. made it 5-0 with just 15 seconds left in the opening frame, as Duggan crashed the crease and converted a down-low centering pass.

“I think all of our lines can score and contribute,” Klee said. “I think we showed that tonight.”

In the second period, Knight skated below the goal line and centered it to Lamoureux, who got the 6-0 goal at 5:01.

It was a cleanly played game on balance, and that’s why it took till late in the second for the U.S. power play to click. Decker and Stack added man-advantage goals two minutes apart before the horn.

In the last minute of the middle frame, several players collided inside the U.S. blue line and Russian forward Yelena Dergachyova was shaken up. She was helped off to the dressing room. Adding insult to injury, she got a kneeing penalty on the play.

Just 1:23 into the third, Knight waltzed in unobstructed to snap the 9-0 goal past Morozova.

Russia has lost all 12 of its games against the Americans at the Women’s Worlds. Its most lopsided defeat ever was 15-0 on 4 April 2000.