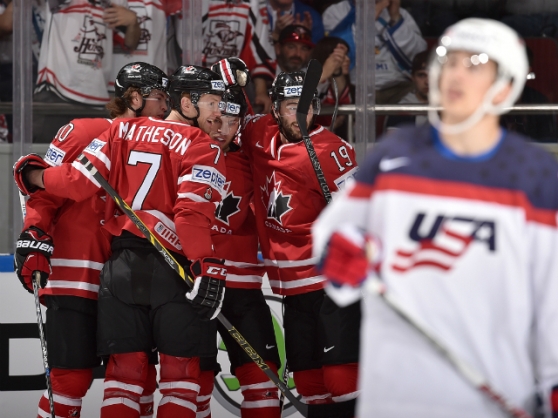 North American rivals Canada and the United States faced off in the opening tilt here at the 2016 World Championships.

Canada came back from an early deficit in the first period to score five unanswered goals en route to a 5-1 victory at the 2016 IIHF World Championships.

Canada has now won its last eleven world championship contests going back to last years tournament when they ran the table and went undefeated in earning gold.

A first period goal by Brendan Gallagher gave Canada a lead they would not relinquish. Cam Talbot turned aside 24 shots for the win.

“We’ve got to fix some things in the defensive zone.” USA Captain Matt Hendricks said. “Our structure broke down too many times tonight and gave them too many opportunities. A team with that type of high-end skill, they’re going to find the back of the net.”

The Americans came out determined to make their mark. When Brody Jenner was called for a high stick at 3:40, it allowed for the first power play of the game. Team USA moved the puck well and some shots found their way to the net. At 4:54 Patrick Maroon found the back of the net with a solid effort.

Maroon took a pass from Kyle Connor near the side of the net then made a move in front for a high percentage shot. Talbot was able to get his pads on it but Maroon calmly found the rebound in traffic, took control of the puck and went backhand to score on his Edmonton Oilers teammate.

Connor and David Warsofsky assisted on the power play goal.

Not to be outdone, Canada bounced back quickly some thirty-one seconds later. Keith Kinkaid could not react fast enough to a Taylor Hall shot and the game was tied. Corey Perry was able to force Noah Hanifan to turn over the puck. Derick Brassard took over from there finding Hall who shot the puck under the goalie’s left pad at 5:25.

Hall picked up where he left off last spring when he scored seven World Championship goals and finished as the third leading goal scorer in the tournament.

Canada took the lead at 8:48 with Gallagher’s goal. Gallagher gained possession of the puck deep in the USA zone then shuffled a pass on to Ryan O’Reilly. O’Reilly sent it back to Gallagher who rifled a shot over Kinkaid’s left shoulder. It was his first of the tournament and scored on his birthday.

“It was nice.” Gallagher said of scoring on the day of his birth. “It’s actually my little sister’s birthday as well. I texted her and told her I’d get her one, so that’s nice.”

Matt Duchene widened the lead at 11:37 of the second period. A rocket from the faceoff circle extended Canada’s lead to two goals. Duchene accepted a pass from Cody Ceci and showed plenty of patience in taking his time to shoot.

Once Canada found a groove in this game, they really got things rolling. The Americans created their chances but were not able to solve Talbot beyond the first period.

“The guys are getting along great.” Gallagher said of the effort. “We’re becoming a team as we go along. It was a good start for us. Hopefully as the tournament goes on, we’ll get better and better.”

Boone Jenner added a third period tally for good measure. Similar to the goal scored by Hall in the first, Jenner sent a shot in at a sharp angle past Kinkaid’s left pad and skate.

With this battle of North America behind both teams, they now focus on European competition in their quest to advance in this tournament. The US must shake this off and come back tomorrow to play Belarus.

“There’s a lot of hockey ahead,” Hendricks said. “Fortunately, we get to play again tomorrow. It’ll be good to go home, get some good food, get some good rest and be ready to go.