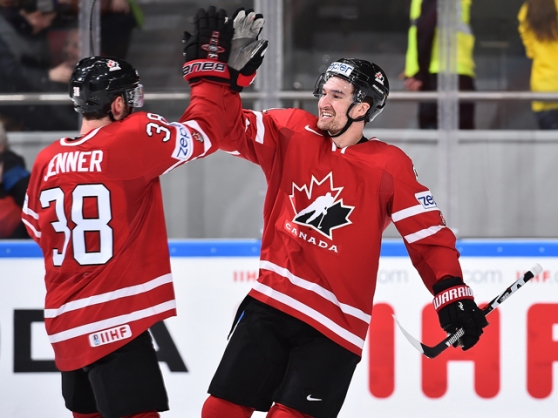 Two goals by Taylor Hall carried Canada to a 5-2 win over Germany to continue their unbeaten streak at the World Championship.

Canada encountered a determined German squad that tied the score 2-2 after two periods. A rally in the final twenty minutes led to a Canada win that keeps them atop Group B of the IIHF Ice Hockey World Championships in Saint Petersburg.

Riding the wave of their win over Slovakia, Germany came into this game with renewed confidence. They started skating well, creating scoring chances and continuing to press the action even when they were down two goals early in the second period.

“That wasn’t an easy game from the start,” Cam Talbot said after the game. “We knew that when they dropped the puck. That was something maybe that we needed, a little adversity going into the third period there. We put our work boots on and came out in the third and got the job done. But we’ve got to give them a lot of credit tonight.”

Taylor Hall continued his consistent scoring for Canada. At 3:54, Hall shot the puck through Timo Pielmeier to make it 1-0. Hall has now scored in each of Canada’s first four games in this tournament and has once again revealed himself to be an offensive force.

“He’s got kind of a sneaky release,” Talbot said of his teammate. “I see it all the time in practice. His speed is so deceptive on the outside. He’s got a lot of speed and a great shot. It’s tough to defend.”

With 4:53 remaining in the first, Germany thought they tied the game at one. Tobias Rieder’s pass to Gerrit Fauser hit his skate and carried into the net. The play was reviewed and ruled no goal.

Canada outshot Germany 8-6 in the opening period and held a 1-0 lead.

With three seconds remaining in Patrick Hager’s holding an opponent penalty, Derick Brassard sent an accurate laser to Matt Duchene who sent a pinpoint pass onto the tape of Corey Perry’s stick in the slot. Perry was in the perfect position to redirect the puck into the net at 3:22 of the second.

It was Perry’s third goal in as many games after being held goalless in the opener against the USA.

Even though goaltender Thomas Greiss is now available to help Germany, head coach Marco Sturm chose instead to stay with Pielmeier who has started all four games for his country. Greiss remains in the wings.

Germany was down, but not out.

They would continue to work until they scored two goals and tied the game.

Sinan Akdağ tied the game when he took a pass from Phillip Gogulla in stride and found the top left corner of the net. For Akdağ, who is making his third appearance with the German national team at the World Championships, it was his first goal ever in tournament play.

“We knew we were playing a good opponent, and we had a couple of breakdowns,” Perry said. “They capitalized on it. We talked between the second and third. It was a little adversity. We just had to be a little quicker to the puck, a little more physical, and start wearing their D down. Once we did, we got some bounces.”

To start the third, Germany received a power play opportunity with a chance to take the lead. They were unable to get what would have been a game changing go ahead goal.

On the first shift after the penalty ended, Hall scored again. Connor McDavid picked up a rebound and quickly passed it to Hall who wasted little time in banging it home.

Canada then added a pair of goals as Boone Jenner and Cody Ceci scored to close out the game.

For his efforts, Hall was named Canada’s best player of the game.