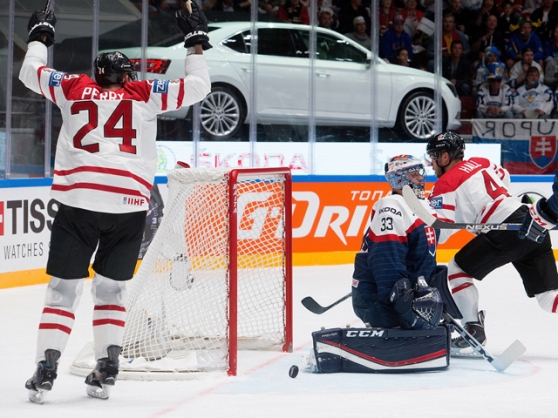 Canada and Slovakia are a tale of two teams. Both started the 2016 IIHF Ice Hockey World Championship winning their first two games. Since then, Slovakia has lost its last three and Canada has won its last three, including today.

Canada remains tied with Finland atop Group B with fifteen points.

Morgan Reilly’s first period goal was all Canada would need to secure the win. Cam Talbot, making his fourth start, stopped 18 shots for his second shutout.

“We don’t give up a whole lot for a lot of stretches.” Talbot said after the game. “So it’s about trying to stay focused and trying to stay in the game. I can’t say enough about this group of guys, the way they play defensively. Not just offensively. You can tell that we don’t give up a whole lot of Grade-A scoring chances, and when we do, we’re there to clean out the rebounds and not give them up. It’s been a lot of fun playing behind these guys.”

Both teams traded early chances in the game. When Mark Stone was called for interference at 3:31, Slovakia was able to get some shots off and start things in the right direction.

Next it was Canada’s turn to take a shot at working the power play. They, too, were able to generate meaningful chances but the game remained a scoreless tie.

But as they have in four of their five games at Yubileiny Arena, Canada scored the first goal.

Their opening goal and eventual game winner came when Taylor Hall forced Juraj Mikuš to the puck over deep in his zone. Hall took the biscuit and passed it to Derick Brassard whose shot was saved by Július Hudáček.

Immediately upon winning the faceoff, Canada scored at 11:09 when Reilly’s wrist shot found the back of the net.

“A little lucky, I think. Just a point shot.” Reilly said of his marker. “We had a screen in front. It’s nice to get the first one out of the way. The most important thing is we get the win and move on.”

The momentum began to shift and Canada was once again in fine form. They continued to swarm the zone pressing for another score.

A blind backhand pass by Andrej Sekera was intercepted by Brad Marchand, who then whipped a pinpoint pass onto the stick of Matt Duchene in front. Duchene was able to score his third goal of the tournament.

“We gave them lots of pucks. We gave it away.” Sekera said. “We couldn’t handle their speed or their intensity. Even though at some point we played OK, they’re a really experienced team and they know when to start to play hard. That’s why they scored those two goals (in the first period).”

Slovakia was able to put more pressure on Canada in the second period, getting eleven shots. Ivan Švarný would lead the way with three.

There was a two-on-one where Tomáš Jurčo was able to get a shot off as did Martin Marinčin who was trailing on the play. In each case Talbot was there to close the door.

Later, Vladimír Dravecký had a fairly open net to shoot at when Tomáš Marcinko was able to feed a pass in front. Marchand was able to just get a stick on it to cancel out Dravecký’s effort and aid Talbot who was off balance.

At 13:56 Hall scored again, his sixth of the World Championships, on the power play. Hall’s goal featured great passing from Connor McDavid to Mark Stone. Stone had two assists in the period.

Mark Scheifele scored in the closing two minutes of the second with a deke around Jurčo. By this point, the game was well in hand for Canada.

A final goal by Canada in the third only added to Slovakia’s misery on the evening.

Canada plays France next while Slovakia faced yet another challenge to revive their playoff round qualification in taking on an undefeated Finland.

Canada will also add Ryan Ellis in the lineup. Ellis comes over as his Nashville Predators were eliminated from the NHL playoffs and should further bolster the blueline.

“I know he’s got a great shot and he’s a power play guy.” Talbot said of the addition. “Really good puck mover. He can play a pretty good physical game too. He’s a little guy but he plays with a lot of heart. He’s going to be a good addition for us.”