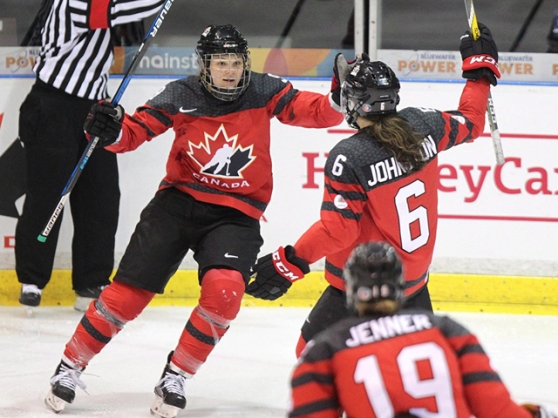 Stop us if you’ve heard this one before.

Marie-Philip Poulin scored 52 seconds into overtime to give Canada’s National Women’s Team a 3-2 win over the United States and a sweep of the inaugural two-game December Series.

The captain – who has a habit of coming up clutch against the Americans – took the puck from her own blue-line and went five-hole from the slot.

For the second straight game Canada had to rally for the win. Trailing late in regulation, the team pulled goaltender Shannon Szabados for an extra attacker and called a timeout. Off the ensuing offensive zone face-off, Natalie Spooner won the draw back to Poulin, who fed Jennifer Wakefield for a wicked one-timer to tie the game with 24 seconds to play.

Canada was outshot 25-20 overall, but stellar goaltending from Szabados – especially in the second period, when the team was outshot 13-1 – allowed the team to stay in it until the end.

Just like in Game 1 it was Canada getting on the board first. Rebecca Johnston took a pass from Brianne Jenner and kept the puck on a two-on-one with Wakefield, surprising Nicole Hensley with a shot that beat the American netminder five-hole. It was the forward’s fourth goal of the series.

The Americans equalized with four minutes to go in the opening period. Emily Pfalzer moved the puck from one end of the ice to the other, dropping a pass back for Jocelyne Lamoureux-Davidson to finish off top shelf from the left circle.

That lead became two with five minutes to go in the second period. With Canada unable to clear its zone, the United States sent the puck down low and around the net. Hilary Knight’s shot from the side boards appeared to go off Meaghan Mikkelson’s stick and in.

Canada had two great chances to tie the game before the late minute of regulation. It started the third period on a two-man advantage for 1:40, and Poulin rang a one-timer from Spooner off the post. And just short of halfway through the period, Amy Potomak was awarded a penalty shot, but her attempt to go five-hole was turned aside by Hensley.