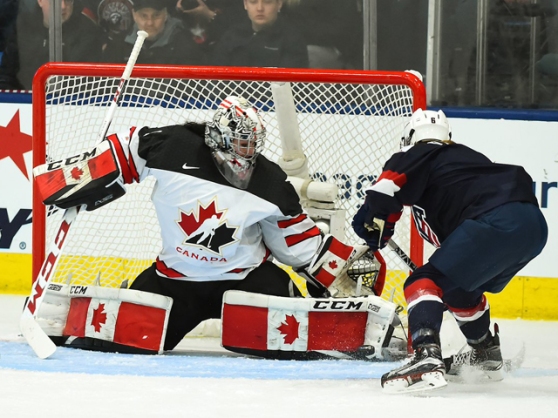 The Americans may have been a few practises shy of being fully game ready, but they showed no signs of rust, and their rivalry with Canada was just the ticket.

Nicole Hensley stopped all 18 shots from Canada in only her second career start in World Women’s Championship play, backstopping the host United States to a huge 2-0 win over Canada to start the tournament for both countries.

Brianna Decker and Gigi Marvin were the goalscorers for a Team USA that utilized its speed to full effect.

“I thought we skated really well and played with a lot of emotion,” Monique Lamoureux said after.

“Our team fed off the energy from the crowd and we pressed the whole game,” Decker added. “We moved our feet well, moved the puck as quick as possible. That was the key.”

“We’re so united, so strong as a group,” Marvin enthused. “We were itching to be on the ice, and I think we displayed that beautifully, the support on the ice. We were couldn’t wait to get out there. It was a great first game.”

“I don’t think we were as ready as we should have been,” admitted Canada’s newly-minted captain, Marie-Philip Poulin. “They got up to their pace right away. We were better in the third but you can’t win a game with 20 minutes of good play.”

The United States and Canada played exactly the kind of game they always do, the kind of game that shows the world what women’s hockey can be like. Played with often long stretches without a whistle, the game was end-to-end exciting and lived up to all the pre-tournament hype.

Shannon Szabados was making her first start for Canada since the Sochi Olympics threee years ago, but she showed why the Columbus Cottonmouths of the SPHL have used her in a men’s league for the last three years.

She kept the game scoreless midway through the opening period by making a pad save on what looked like a sure goal off the stick of Kali Flanagan, who took a pass from Alex Carpenter from in close.

Early in the second, it was Canada that nearly scored. Poulin flew down the left wing on a two-on-one, but rather than pass she elected to try her luck with a high shot to the short side. It beat Hensley but rang sharply off the post to keep the game scoreless.

The U.S. sped up ice with relentless force, and dominated for many stretches of play in the second. Just when it seemed they had taken over, though, Canada came back with a dominating shift of its own. But neither side could break the ice, as it were.

And then, fianlly, a goal. Megan Bozek flew down the right wing, curled around the goal, and slid the puck through the crease. Szabados covered the post, but the puck came to Decker on the back side, and she quickly smacked it in at 17:54 for a well-earned 1-0 lead.

Canada came out flying to start the third but again couldn’t connect around the goal. Hensley was letter perfect when she needed to be. The hosts increased their lead to 2-0 at 4:49 after Canada failed to clear a loose puck. Gigi Marvin took a quick shot that was redirected in front, fooling Szabados and giving the U.S. a much-needed insurance goal.

Both teams are right back at it tomorrow. The U.S. has the short rest, playing a midday game agianst the Russians. Canada, meanwhile, plays Finland in the evening.