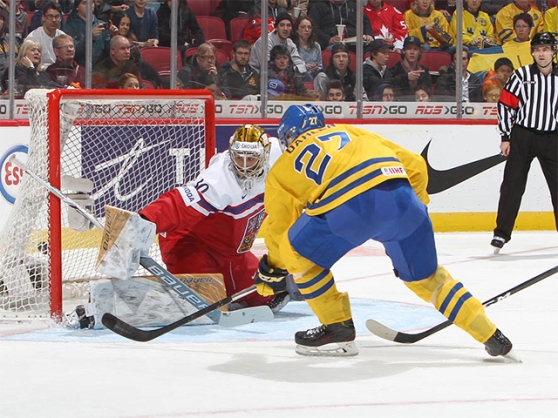 Jonathan Dahlén starred with a hat trick as Sweden beat the Czech Republic 5-2 to complete a perfect round-robin. Goalie Filip Gustavsson debuted with a win.

In Monday’s quarter-finals, Sweden will face the loser of the Russia–Slovakia game in Montréal.

Topping Group A with 12 points, Sweden is questing for its first Gold medal since 2012 and first medal of any shade since 2014’s Silver. The Czechs last won gold in 2001 and haven’t won anything since 2005’s Bronze.

This was a battle of back-up goalies. Gustavsson, who was named Best Goalie at the 2016 IIHF Ice Hockey U18 World Championship en route to silver, made 36 saves to triumph in his first World Junior game. The Czech Republic’s Daniel Vladar had 33 saves.

“It feels good, and I think I played pretty good today,” Gustavsson said. “Unfortunately, I let in two goals there late in the game, but I think it was a good game.”

Other scorers for Sweden were Rasmus Asplund, who chipped in a goal and an assist, and Jens Lööke, who had a single. Team points leader Alexander Nylander earned two helpers.

Sweden has now won 40 consecutive World Junior group games. The Juniorkronorna’s last round-robin loss was on 31 December 2006 when Jack Johnson scored at 3:16 of overtime to give the Americans a 3-2 win in Leksand, Sweden.

“It’s huge for Swedish hockey to be able to accomplish that,” said Asplund. “I think it’s going to keep on going for a few years, too, because we have good young guys coming up for next year too.”

David Kaše replied with a goal and an assist for the Czech Republic, and captain Filip Hronek also scored.

The Czechs had an up-and-down round-robin. After upsetting defending champion Finland 2-1 in the opener, they lost two games in extra time to underdogs, 4-3 to Switzerland and 3-2 to Denmark.

“It’s tough every time you get scored on, especially against these kinds of teams, the top teams,” said Czech forward Adam Musil. “You gotta play them straight up and play consistently. We just didn’t do that today and we got what we deserved.”

The Swedes clearly had no intention of letting the Czechs finish second in the group. On a 2-on-1 rush, Asplund went to the net and banged in a rebound to open the scoring at 0:37. The Swedish assistant captain continued to make noise, laying out Kaše with a big neutral-zone hit that had the Bell Centre crowd gasping.

Kaše came close to equalizing when he shoved a puck through Gustavsson’s legs, but it trickled harmlessly past the post.

On Sweden’s first power play of the game, Asplund maintained his hot hand, sending a lovely pass from the right faceoff circle to Dahlén, who directed the puck past Vladar at 8:56.

The 3-0 goal showed that this just wasn’t the Czechs’ day. Czech forward Lukáš Jašek went to the net to clear away the loose puck on a Swedish rush and it deflected in off his right skate at 16:46. Lööke, a three-time World Junior participant, got credit for his first goal of the tournament.

“It does not feel good when you get an own goal,” said Czech forward Filip Chlapík. “We just didn’t play the way we wanted to. We have to get better.”

Early in the second period, Sweden’s Tim Söderlund was shaken up when he slid hard into the boards on a shorthanded rush. However, the 18-year-old Skelleftea forward would return to action. On this Czech man advantage, Gustavsson made a pair of dazzling close-range saves to preserve his team’s commanding lead.

With 2:51 left in the middle frame, Dahlén fought off defenceman Jakub Zbořil’s checking to push a backhand deke past Vladar for a 4-0 lead. Filip Ahl nearly added Sweden’s fifth goal just before the buzzer when he rang one off the iron.

In the third period, Dahlén completed his hat trick at 3:34 on the power play, as he skated out of the corner along the goal line and squeezed another backhander in.

“That’s the skill he has and the skill he shows back in Sweden,” Asplund said. “It’s really good for us that he can show it here too.”

The Czechs spoiled Gustavsson’s shutout bid at 13:09 with Kaše’s jammed-in goal. Hronek cut the gap to 5-2 on the power play at 17:28, but it was too late for a miraculous comeback.

“If we play like the third period all game, I think we can be successful,” said Chlapík.

Gabriel Carlsson, who played a team-leading 20:53 on defence in Sweden’s 3-1 win over Finland, sat this game out.

Of getting Carlsson back, Asplund said: “It’d be really important for us. He’s a big, big D-man and we need him. Hopefully he’s fine for the quarter-final.”