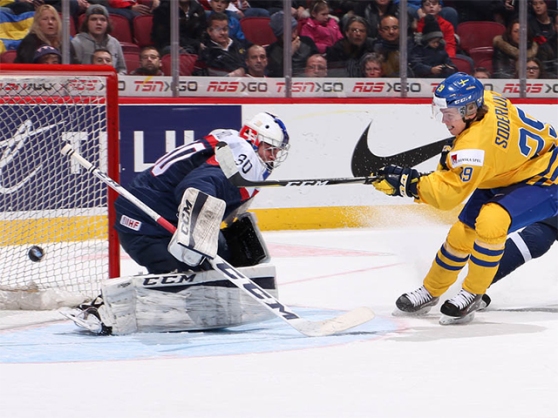 On Wednesday, the Swedes will battle the Canada-Czech Republic winner in the semi-finals.

Except when coach Tomas Montén’s team let its guard down at the end of the second period and the start of the third, Swedish goalie Felix Sandström had a quiet afternoon compared to Slovakia’s Adam Húska. Shots favored Sweden 50-18.

“We got the start we really wanted,” said Montén. “It was a similar start like in the last game against the Czechs. We wanted to get the speed going, create pressure and chances. We played a great first period.”

“We just couldn’t keep up with the Swedes,” said Slovak coach Ernest Bokroš. “They skated better and were better one on one. The shot advantage speaks for the Swedish team.”

The Swedes, who came fourth the last two years, are hoping to top the podium for the first time since 2012 in Calgary. Their only other gold medal came in 1981 in West Germany. They haven’t medaled since settling for silver at home in Malmö in 2014.

“I remember the feeling last year,” said Eriksson Ek.”I don’t want to have that feeling again. I hope we can step up a little bit more and win the hockey games.”

At the 2015 World Juniors in Toronto, the Slovaks earned a surprising bronze thanks to Best Goaltender and tournament MVP Denis Godla. It was their second World Junior medal of all time, following 1999’s bronze in Winnipeg. However, they’ll head home empty-handed in 2017.

“I think this year was pretty hard for Team Slovakia because we had a really hard group with Canada, the USA, Russia and Latvia,” said Slovak captain Erik Černák. “But we’re staying in the (top) division, and we beat Latvia. I think that was really important for Team Slovakia.”

Sweden took just 1:08 to strike first with the man advantage. After a faceoff win in the Slovak end, Eriksson Ek accepted a pass from Asplund and snapped it from the right circle over Húska’s glove.

The Juniorkronorna kept coming. Húska foiled Jonathan Dahlén, who had a hat trick versus the Czechs, on his backhanded breakaway attempt. Eriksson Ek picked off Černák’s pass up the middle and zinged one off both posts. Gabriel Carlsson also tasted iron with a point shot.

Söderlund, an 18-year-old from Skelleftea, gave Sweden a 2-0 lead at 16:28 with blazing right-wing speed, beating Slovak defenceman Martin Fehérváry wide and cutting in to fire it home. It was the World Junior rookie’s first goal at this level.

“I got a pass from Andreas Wingerli from the middle, and I broke in and shot,” said Söderlund.

Just 33 seconds later, Grundström made it 3-0 when the Swedes won an offensive-zone faceoff and he roofed one from the right faceoff dot. When the horn sounded, Sweden was outshooting Slovakia 20-5.

Sweden got an early second-period power play when Struška hit Asplund from behind into the boards. Asplund was shaken up, but kept on plugging.

Nylander put Sweden up 4-0 at 7:13, taking Dahlén’s cross-ice pass from below the goal line and squeezing the rebound past Húska’s right skate. At 13:07, Filip Ahl took an open-ice hit to make a play, finding Karlström unguarded in front of the Slovak goal, and his high backhand gave Sweden a five-goal edge.

The Slovaks woke up with a pair of late second-period goals. Bodák spoiled Sandström’s shutout bid on the power play at 15:48. At 16:54, Struška, standing in front, deflected in Černák’s point shot. Sandström barely denied a fired-up Struška and Ružička on a flurry of chances just before the buzzer.

“We played really well in the second period,” said Černák. “We scored two goals. If we played the same game all game, that would have been good.”

At 1:53 of the third, Ružička eluded Andersson’s checking as he swung out in front of the Swedish net and wrapped the puck through Sandström’s pads to cut the deficit to 5-3.

But that was as good as it would get for the Central European underdogs, who will finish eighth for the third time in six tries under Bokroš.

“It was a bit shaky when they scored their goal there, but we’re a really calm group,” Kylington said. “We talked a lot in the bench. There wasn’t any panic. I think we handled it pretty good.”

In the third period, Söderlund ended Slovakia’s comeback hopes at 2:24, stickhandling in the slot before zipping a wrister past Húska’s blocker to make it 6-3.

“It was an important goal for us,” said Asplund. “We got back the energy and they got a little bit low after that.”

Andersson scored Sweden’s seventh goal from behind the net on the power play at 4:27. Eriksson Ek rounded out the scoring with the man advantage, converting a rebound with 2:56 left.

For Slovakia, at least the final score was an improvement on last year’s 6-0 quarter-final loss to Sweden in Helsinki. The Swedes have won 11 straight World Junior quarter-finals. Their last quarter-final loss was 1-0 to Finland with Tuukka Rask in goal on 2 January, 2006 in Vancouver.