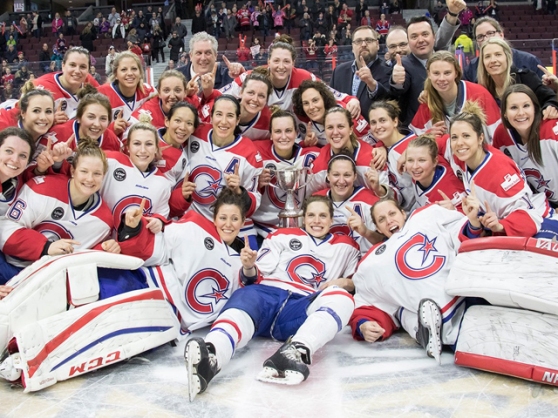 The Montréal Canadiennes, avenging their 2016 Clarkson Cup loss to Calgary and avoiding a third straight Cup defeat, today clinched the 2017 Clarkson Cup with a 3-1 victory over the Inferno in Ottawa, Ontario.

Unlike the lopsided victory in last year’s final, this was a closer affair, with team captain and league MVP Marie-Philip Poulin notching the game winning goal, and the empty netter to seal the victory, in front of a pro-Montréal crowd at the Canadian Tire Centre, with Katia Clement-Heydra with the other goal for Montréal; Jillian Saulnier scored the Inferno’s only goal. Montréal, who finished three wins behind Calgary for first place in the CWHL, and who split the season series against Calgary 3-3, won their fourth Clarkson Cup in league history (winning in 2009, 2011 and 2012), but their first as the Canadiennes.

Our congratulations go out to the players, management and fans of Les Canadiennes, with those on the roster that have also held the IHLC highlighted in bold: