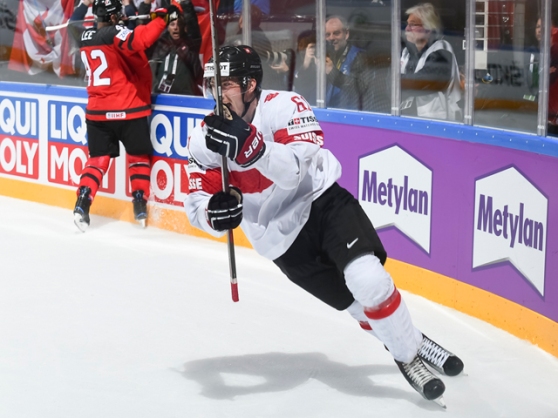 Fabrice Herzog scored twice, including the overtime winner at 3:40, as Switzerland rallied from a 2-0 first-period deficit to stun Canada 3-2 on Saturday.

Herzog’s winner was a magnificent individual effort. On the left side, the 22-year-old Worlds rookie winger from ZSC Lions pushed the puck past Canadian defenceman Chris Lee, chased it down, and zipped a backhander over Canadian goalie Calvin Pickard’s right shoulder.

Vincent Praplan added a goal and an assist for the Swiss, who ended Canada’s streak of regulation wins at this tournament at four straight.

“We didn’t quit working,” said Switzerland’s Andres Ambühl. “We always believed. We threw pucks at the net all night, and then finally it bounced in. We got a little bit lucky, but we don’t care. A win is a win.”

Ryan O’Reilly and Mitch Marner scored for Canada. Newcomers on the blue line also contributed, as Lee (Metallurg Magnitogorsk) got an assist for the second straight game, while Colton Parayko (St. Louis Blues) made his Team Canada debut and had a helper as well.

Shots favoured Canada 45-26, and Swiss goalie Leonardo Genoni was excellent after taking over from ex-NHLer Jonas Hiller early in the first period.

It was an emotional, physical tilt, and this has to be a huge morale-booster for a Swiss team that hasn’t played consistent hockey in Paris, but showed real grit against the two-time defending champions.

“We just stuck to it,” said Simon Bodenmann. “We didn’t give up after the bad start. We didn’t plan on that, of course. We gave up two early goals but we just kept going, stuck to our plan, and scored two quick goals in the third period.”

Switzerland has given Canada trouble in recent years, with the 2-0 win at the 2006 Olympics in Turin, Italy being the most infamous example. This was just the third Swiss win over Canada in 30 all-time meetings at the Worlds, the others being a 4-1 decision in 2010 and a 3-2 shootout victory in 2012.

“They never quit,” said Canada’s Travis Konecny. “We kind of got away from our game a bit. We should have gotten more pucks to the net. We had a little bit more to give and we gave them opportunities and they took advantage.”

With Tyson Barrie injured and out for the tournament, Canadian coach Jon Cooper placed the big-bodied Parayko of the St. Louis Blues alongside Marc-Édouard Vlasic on the top defence pairing. Meanwhile, Swiss coach Patrick Fischer sat forward Denis Malgin, pointless through four games in his first Worlds, in favour of the speedy Reto Suri.

Deafening chants of “Hopp Schwiiz!” resounded at the puck drop, and it was a fired-up atmosphere with 12,932 fans at the AccorHotels Arena. Hiller got just his second start since the 5-4 shootout win over Slovenia to open the tournament.

The Canadians dominated the first period, outshooting Switzerland 16-6. They got the first power play after Denis Hollenstein was sent off for throwing a retaliatory hit in the offensive zone, and took just 31 seconds to click. O’Reilly, parked to the left of Hiller’s crease, banged in his own rebound for his third of the tournament.

At 6:28, it was 2-0 Canada when Marner, from close range, backhanded the puck in off Swiss defenceman Roman Loeffel’s legs. That was it for Hiller, and in came Genoni.

The Swiss tried to fight back in the scoreless second period, but Pickard was there to meet the challenge, such as when he stopped Loeffel’s center point blast through traffic.

“They kept going and going, but we pushed against them and our goalie was great,” said Ambühl.

In the third period, Switzerland finally broke through. On the power play, Praplan thwacked the puck in front and Herzog burst off the goal line to backhand one over Pickard’s shoulder at 6:37. Finally the Swiss fans had something to cheer about, and “Hopp Schwiiz!” resounded anew, accompanied by jubilant literal hopping.

The place exploded with joy when Praplan notched the equalizer at 9:44. Pickard misplayed the shot off the rush from the right boards, deflecting it into the net off his blocker arm for Praplan’s third of these Worlds.

Jacked up, the Swiss kept coming, with great chances for Herzog and Hollenstein. Switzerland’s Dean Kukan took an ill-advised cross-checking penalty on Chris Lee with less than four minutes left, giving Canada a huge opportunity. But MacKinnon took a minor for interference at the Swiss blue line that ended it, and it was Switzerland’s turn to go 5-on-4. Still, there was nothing doing.

Canada had the better chances in overtime, but Herzog delivered the coup de grace.

“They had the puck way more than we did in the overtime but then one shot, and that’s all it takes,” said Bodenmann.

Both nations will finish up their group slate versus 2016 Silver medalists Finland, Switzerland on Sunday and Canada on Tuesday.