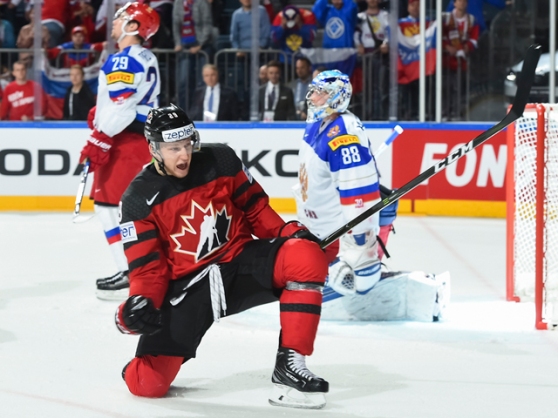 Down 2-0 after 40 minutes and looking overwhelmed, Canada scored four goals in the third – three late – to beat Russia, 4-2, and advance to the Gold medal game.

Having won in 2016 and 2015, Canada will play the winner of tonight’s Sweden–Finland game looking for a golden hat trick. Russia will play tonight’s loser for Bronze.

“It was loud out there,” said Canadian forward Jeff Skinner. “That’s what you want. You want to come and play in big games, big moments. For us, fortunately we got the result we wanted, and now we’ve got another test coming up.”

“That was a pretty special game, the way it all played out being down a couple,” said defenceman Colton Parayko. “Credit to them. They scored some nice goals early on; they moved the puck well. But credit to us as well for sticking to the game plan. I thought it was a good effort. It’s pretty special to be playing for gold tomorrow. It gives you chills, goosebumps when you think about it. We have a good group and it’s going to be a lot of fun.”

Ryan O’Reilly scored the winning goal with only 3:02 remaining in the third period, knocking in a loose puck off a scramble from the side of the goal.

Nathan MacKinnon had tied the game just two minutes earlier. He lost control of a pass in the slot, but no sooner had Vladimir Tkachyov gained control of the puck than MacKinnon stripped him of it and fired a low shot all in one motion, beating Andrei Vasilevski to the short side.

In both cases, the Canadian player simply beat the Russian opponent to puck possession to create the goals.

Sean Couturier added an empty netter with 1:07 left to finalize the outcome.

“Canada got that early goal in the third and suddenly it was a different game,” conceded Artemi Panarin. “We got nervous, and that’s why we lost. We didn’t play badly, and we had the initiative early on.”

“In the (second) intermission, we focused on spark,” O’Reilly noted. “We needed something to get us going, whether it was just a couple of good chances or scoring a goal. Getting that first power-play goal, you could see a weight was lifted, and we started to play our game again. There wasn’t any sort of panic. There were 20 minutes to go, and we’ve done a lot with 20 minutes before. So we were confident in each other. It was just about getting out of our heads and trusting each other and winning battles.”

The first period was scoreless and cautious, far more so than most games between these great rivals. But that caution was abandoned in the second, in large measure because of four Canadian penalties.

A bad line change and confused defence on Canada’s part gave Russia the first goal midway through the second when Artemi Panarin found Yevgeni Kuznetsov wide open to the back of Canada’s goal. Kuznetsov had a tap-in at 12:16 to make it a 1-0 game. This was the latest a Canada-Russia game had waited for a first goal since the quarter-finals of the 2006 Olympics in Turin.

Just two and a half minutes later, Russia made it 2-0 on a power play. Coming in over the line on a three-on-two, they executed a nice three-way passing play between Panarin, Vadim Shipachyov, and Nikita Gusev. Gusev fanned on the back-door pass, but the puck still floated in above Cal Pickard’s outstretched pad.

Canada got back into it just 17 seconds into the third on a power play that had carried over from the second. MacKinnon slid a pass to Mark Scheifele in the middle of the Russian box, and Scheifele expertly redirected the puck past the glove of Vasilevski.

That was just the boost Canada needed, and it dominated the third, outshooting Russia, 19-5, and looking like the more confident team right to the end.

The game may have had a 15.15 start time, but the gamesmanship started two minutes earlier. Canada came out on the ice on time and lined up along the blue line as is international tradition.

The players waited. And waited. No Russians. Realizing what was happening, the Canadians then started to skate around, and when they saw the Russians come out, they went to the bench, ready to start the game.

The Russians skated to the blue line to line up, realizing what the Canadians were now doing, and retreated to their goalie, Vasilevski, for a final pep talk.

The warrior of the opening 20 minutes must surely have been Russian forward Sergei Andronov.

He was nailed behind his own net by a very effective hip check from Travis Konecny. Later he was blind-sided by Mark Scheifele, which resulted in the only penalty of the period, and near the end Andronov, head down behind his goal, was hammered with a clean but fierce hit from Brayden Schenn.

“We know we blew a big chance,” Andronov said. “It hurts. It hurts for us, and it hurts for the fans, who’ve been crazy here throughout the tournament.”

“It was exciting,” said Pickard. “Our backs were against the wall going into the third period, and we just regrouped and came out and played our game. Everybody in the building saw it. It was a pretty good clinic, for sure.”

“You come over here to win and we put ourselves in a good situation,” Skinner said. “We want to try and get off to a good start tomorrow. We are going to face a good team either way so it will be a challenge for us.”