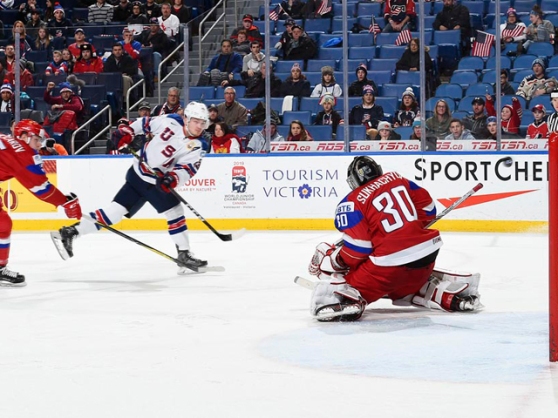 Kieffer Bellows scored a Production Line-type goal to break a 2-2 tie midway through the third, putting the U.S. in the semis. Russia goes home in 5th place.

Dylan Samberg fired a shoot-in into the corner at just the right angle, and as the puck caromed back into the slot Bellows tore in and one-timed a blistering shot over Vladislav Sukhachyov’s shoulder at 12:31.

This kind of goal was made famous by Gordie Howe-Ted Lindsay-Sid Abel with the Detroit Red Wings when goalies rarely roamed from their crease.

“I think it was just simple hockey,” Bellows offered. “He put the puck deep and I knew the boards are lively back there, so I thought I could just forecheck and put the puck on net. Lucky enough it went in.”

Bellows scored twice for the winners and now leads the tournament with six goals. Teammate Casey Mittelstadt had an assist and continues to lead the points race with 10.

With the win the United States will now play Sweden in the semi-finals on Thursday afternoon. Canada and the Czechs face off in the other semi.

“Obviously our goal is a Gold medal, and going through Sweden right now is our focus,” said Adam Fox. “They’re a skilled team. They have a lot of great players. We’ll do our pre-scout and be ready for them.”

Russia, meanwhile, had the longest active medal streak in U20 play, reaching the podium each of the last seven years. Tonight’s result, then, can only be seen as a disappointment.

The game was chippy and emotional, and the Americans were at a disadvantage in that they dressed only 18 skaters (the Russians had the standard 20).

“This rest day will be huge for us,” acknowledged defeneman Ryan Poehling. “We were short guys tonight, so we had a lot of guys playing heavy minutes. This rest willbe good for us.”

“We stuck with it,” said Brady Tkachuk. “We knew we were going to win. We were confident. We can enjoy this tonight, but we’re back tomorrow focusing on Sweden. It’s a difficult task, but we’re really excited.”

The Americans started out like a house on fire, dominating puck possession and attacking the Russian net effectively. They were rewarded early on with a power-play goal from Bellows. He scooped up a rebound in the slot and fired a quick shot that beat Sukhachyov at 2:18.

The Russians didn’t get a shot until seven minutes in, and even that was a drifter from outside the blue line. But their second shot, almost four minutes later, was a beaut. Marsel Sholokhov snapped a nice backhander off the rush over the glove of Woll at 10:32 to tie the score. Shots favoured the U.S. at that point, 10-2, but it was a 1-1 game.

The U.S. got a well-deserved second goal on a great effort by Kailer Yamamoto. Chasing down a loose puck with Suckhachyov out of position, he turned and fired just as he was being hooked to the ice. Still, he kept his focus and hit the target at 14:34.

The game might have changed late in the period had the U.S. power play capitalized. Vladislav Syomin nailed Max Jones in the head with a dangerous shoulder check and received a five-minute major and game misconduct, but the Russian penalty killers did a masterful job in washing out the penalty without harm.

Although the second period was scoreless, it didn’t want for action, but it was the goaltenders who stole the show. Woll in particular was both good and lucky. In the case of the former, he robbed Vitali Abramov from in close, getting his pad out to make a save even though he was down and out.

Later, Sholokhov walked out front and got off a nice shot, but Woll was square to the shooter and made the save.

In the case of the latter, the luck was with Woll during a late Russian power play when Abramov fired wide when he had an open side of the net to work with.

Russia didn’t take long to stir things up in the third. Andrei Altybarmakyan scored perhaps the nicest goal of the tournament at 3:38. Taking advantage of a turnover inside the Russian blue line, he darted off down ice with only Fox chasing.

Fox didn’t want to take a penalty, and couldn’t keep up, and Altybarmakyan blew by him and tucked the puck in after Woll committed too early. A beautiful goal, and a 2-2 game.