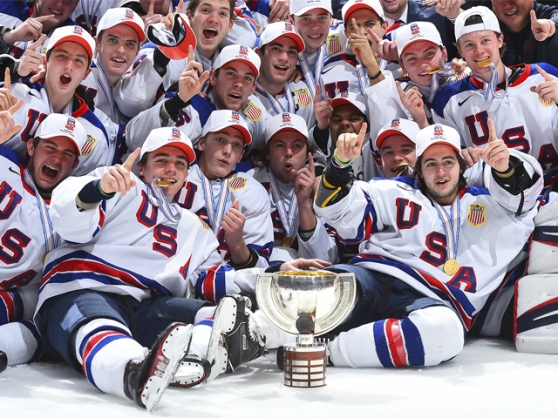 The International Hockey Lineal Championship stayed with Team USA for the majority of 2017, with the 2017 World Junior champions holding the IHLC for eight of a possible twelve games in 2017, including carrying the title into the medal round of the current 2018 tournament.

Sweden began the calendar year in the Quarterfinals of the 2017 tournament, before being dispatched by Canada in the semifinals, who in turn lost to the Americans in a thrilling Gold Medal shootout to end the tournament. Team USA held the title leading into the 2017-18 campaign, sweeping the National Junior Evaluation Camp in Plymouth, Michigan this summer with wins over Sweden, Finland and Canada.

The Americans seemed to be the team to beat with decisive wins over Belarus, Sweden and Denmark to start the 2018 World Juniors season, but were stunned on home ice in a 3-2 loss to Slovakia in the group round, giving Slovakia only their third IHLC in history, and their first since the 2005 World Juniors in North Dakota. Their reign was short-lived, however, as Finland dispatched Slovakia just two days later, who in turn dropped the IHLC back to the Americans on New Year’s Eve, bringing the IHLC full circle in Group A play.

Team USA will now enter the playoff round of the 2018 World Junior Championships with the IHLC, first facing Russia in the semifinals, ensuring that the IHLC will be unified with the 2018 title. The Americans will look to win their fifth World Junior title (and second straight), while the rest of the field looks to strip the U.S. of home ice advantage, particularly the Canadians, who have a large contingent of fans that made the trip to Buffalo, or the Russians, looking to recreate the magic of their 2011 Gold Medal victory on the same Buffalo ice.