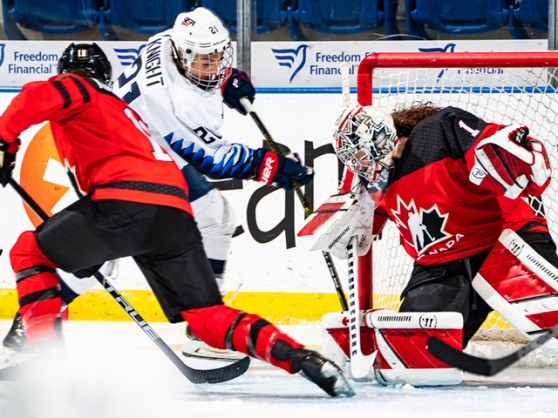 “Whenever these two teams get together, it’s always a great battle,” said Bob Corkum, U.S. Women’s National Team head coach. “We were able to score two goals and gain momentum early, take care of the puck and with some spectacular saves from Rigsby, we were able to get the job done.”

The U.S. struck first just 1:28 into the game when Knight scored on a wraparound to give Team USA an early 1-0 lead. The play started when Dani Cameranesi pulled the puck off the endboards and dropped it back for Knight, who quickly made her way to the front of the net and banged home the opening goal.

Canada evened the score just 2:21 after Knight’s goal when Laura Fortino took a shot through traffic from the point that beat Alex Rigsby high on the glove side.

With 3:29 remaining in the opening period, the U.S. regained the lead when Kelly Pannek carried the puck down the ice and sent a centering pass to Melissa Samoskevich, who was streaking into the offensive zone. Samoskevich one-timed the pass just past the outstretched leg of Canadian goaltender Shannon Szabados to give the U.S. a 2-1 advantage.

Rigsby stood tall in net for the U.S. early in the second period when Cameranesi was sent to the penalty box for a holding the stick infraction. On the kill, Rigsby made three consecutive stops to help maintain Team USA’s one goal advantage.

Just past the midway point of the second period, Sydney Brodt and Brianna Decker charged down the ice on a two-on-one. Brodt carried the puck into the offensive zone and passed to Decker who scored from the top of the crease to put the U.S. up 3-1.

Just 24 seconds later, the U.S. scored again when Sidney Morin fired a shot from the top of the right face-off circle that was deflected in by Knight for her second goal of the evening.

The U.S. extended its lead just 41 seconds into the the third period. Decker carried the puck through the neutral zone and down the wing before sending a pass through the seam to Kendall Coyne Schofield who caught the puck on her back hand and tucked it past the left pad of Szabados for the fifth U.S. goal of the game.

Jaime Bourbonnais scored a power-play goal for Canada halfway through the final period to make the score 5-2, but the U.S. continued its strong defensive play to close out the contest and earn its fourth consecutive title at the Four Nations Cup.

Rigsby made 23 saves to earn her second victory of the tournament.

NOTES: The U.S. and Canada each recorded 25 shots…Knight was named the U.S. Player of the Game.