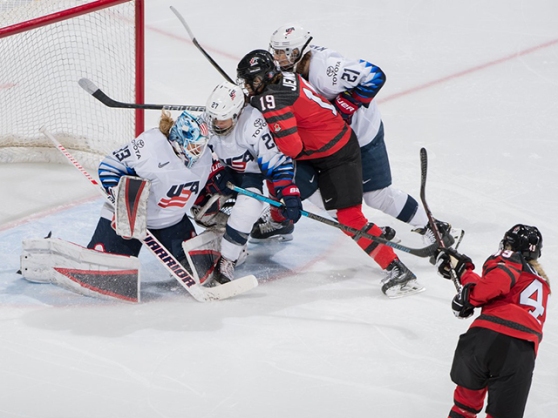 Hilary Knight scored the game-winning goal and Alex Rigsby recorded a 33-save shutout as the U.S. Women’s National Team topped Canada, 1-0, here tonight at the Budweiser Gardens in London to open up play in the 2019 Rivalry Series.

“This game was a battle for a full 60 minutes with both sides having great chances and great goaltending,” said Bob Corkum, U.S. Women’s National Team head coach. “The intensity of the rivalry was definitely on display here tonight, and we will look forward to building on this momentum Thursday in Toronto.”

The U.S. Women’s National Team will face Canada in the second game of the Rivalry Series Thursday, 14 February.

After a physical start to the first period, Rigsby stopped a two-on-one Canadian attempt to keep things scoreless seven minutes into the game. The play materialized as Rebecca Johnston skated in and sent a centering pass under the stick of Emily Pfalzer to Ann-Sophie Bettez for the shot, but Rigsby made a glove save off Bettez’s backhand.

Canada would continue to pressure the U.S. late in the first, but thanks to Rigsby’s poise in net, the game went into the first intermission 0-0.

The U.S. came out in the second period with energy. Just three minutes in, Pfalzer carried the puck into the offensive zone and fired a shot on net that was turned away by Emerance Maschmeyer. Haley Scamurra tracked down the rebound and fired another shot from the slot that was also denied.

The U.S. had another pair of great chances midway through the period. Eight minutes in, Dani Cameranesi picked up the puck off a turnover by Jocelyne Larocque in the Canadian zone and sent a wrist shot on Maschmeyer, but she was stopped. Four minutes later, Amanda Kessel carried the puck up the half wall and sent a pass to Megan Bozek, who was waiting to rip a shot from the right faceoff circle.

But with 1:28 remaining in the middle frame, the U.S. finally broke through. Cameranesi found Savannah Harmon at the top of the left circle and she fired a shot on goal that was turned away by Maschmeyer. Following the initial save, the rebound bounced out to Knight, who was waiting on the doorstep to put home the rebound. The U.S. would carry the 1-0 lead into the final period.

The teams traded chances throughout the third period with Canada pushing to tie the game. As the clock continued to wind down, the U.S. applied pressure in the neutral zone, making it difficult for Canada to advance the puck forward.

With less than a minute remaining, Canada pulled Maschmeyer, but Rigsby stood tall in net and secured the 1-0 victory.

Rigsby made 33 saves to earn the shutout for the U.S.

NOTES: The U.S. recorded 21 shots while Canada had 33…The 2019 Rivalry Series consists of three contests between the women’s national teams of both the U.S. and Canada with games 12 February in London, Ontario, 14 February in Toronto and 17 February in Detroit. The series finale on 17 February will be held at Little Caesars Arena in Detroit. The game will kick off the celebration of Hockey Week Across America…Corkum is serving as head coach of the 2018-19 U.S. Women’s National Team, alongside assistant coaches Joel Johnson and Brian Pothier, and goaltending coach Steve Thompson.