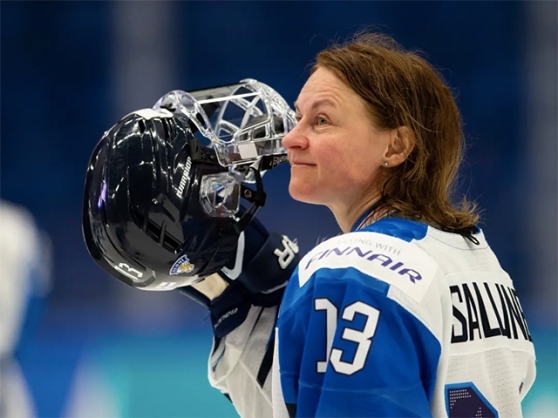 Finnish forward Riikka Sallinen (previously Välilä, née Nieminen), an integral member of the Naisleijonat since 1989 who retired in 2003, but returned in 2013, today announced her re-retirement from professional hockey at the age of 46.

After a year in the Finnish second division, Sallinen joined her hometown JYP squad of the I-divisioona, where she would spend a total of 11 seasons in 4 stints in Jyväskylä. Sallinen also played for Shakers and KalPa of the Finnish league, Lyss Damen in the Swiss League, and four seasons in the Swedish league, with one season in Limhamn and her final three pro seasons with HV71, where she served as team captain since 2017. Sallinen was a four-time Finnish league champion (1989, 1994, 1997, 2016), twice leading the league in points, and winning playoff MVP in 2016.

As Finland has only held the IHLC four times in their history, and all four of their wins coming between 2008-11, during Sallinen’s first retirement, she has never formally held the IHLC; however, due to her immense contribution to the Finnish team, and her participation in almost every one of Finland’s appearances between 1989-2003 and 2013-19, her contribution has certainly been felt, perhaps no more than her final senior game, the 2019 World Championship Gold Medal Game. We wish Riikka and her family the very best for her (second) retirement and the things to come!