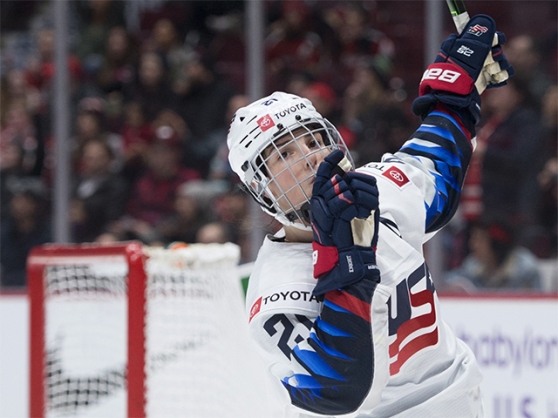 The U.S. Women’s National Team used a pair of third period goals on the way to a 3-1 victory over Canada in game four of the 2019-20 Rivalry Series here tonight at Rogers Arena.

With the victory, the U.S. takes a 3-1 lead heading into the Series finale on Saturday at the Honda Center in Anaheim, California.

“It was a good win for us and another typical hard-fought U.S.-Canada game,” said Bob Corkum, head coach of the U.S. Women’s National Team. “We played a very strong third period and now we look forward to going home to play in front of our fans in Anaheim on Saturday.”

The U.S. scored the opening goal of the game at 8:19 of the first period after Dani Cameranesi snatched a rebound at the goal line and poked the puck behind the skate of Canadian goaltender Emerance Maschmeyer.

Canada responded with a goal of its own 3:21 later to tie the game heading into the first intermission.

Both teams had several chances in the middle frame, but neither could capitalize as it remained 1-1 through 40 minutes.

Hayley Scamurra scored what proved to the game-winner with 12:06 remaining in regulation when she fired a shot past Maschmeyer from close range after a feed from Hilary Knight. Hannah Brandt also assisted on the play.

Knight sealed the victory for the U.S. with an empty-net goal with 1:50 to go to account for the 3-1 final. Brandt and Scamurra earned assists on the tally.

Katie Burt picked up the win in goal, her first as a member of the U.S. Women’s National Team.

NOTES: The U.S. held Canada scoreless on six power play attempts, while the U.S. was 0-for-4 on the power play…Tonight’s attendance was listed as 8,467…Team USA will depart for Anaheim tomorrow afternoon…Saturday’s U.S.-Canada match-up at Honda Center in Anaheim will be the most attended women’s national hockey team game ever played on U.S. soil as more than 11,000 tickets have already been sold. The current record of 10,158 spectators was set on 06 Jan 2002, when the U.S. faced Canada at Joe Louis Arena in Detroit.