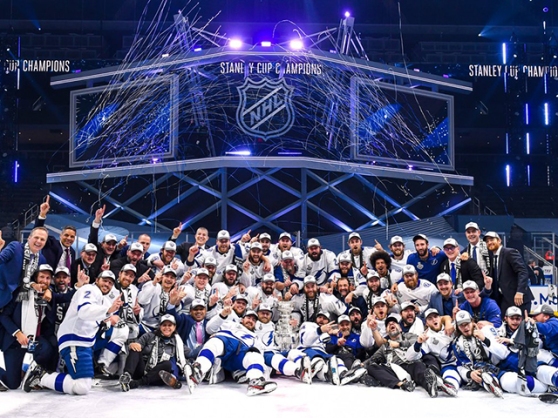 In front of an empty Rogers Place in Edmonton, the Tampa Bay Lightning avenged their shocking 2019 playoff exit with a Stanley Cup victory, defeating the Dallas Stars in six games on the backs of a 2-0 win.

After a thrilling double overtime victory from the Stars in Game 5, the Lightning bounced back with a defensive masterpiece, holding the Stars to just 8 shots in the first 40 minutes, with Andrei Vasilevski notching his first shutout of the 2020 playoffs in a 22-save performance. Brayden Point and Blake Coleman notched the two goals for Tampa, while Conn Smythe winner Victor Hedman was named the game’s #1 star for shutting down the potent Stars offense that fought back time after time throughout the postseason.

The win marks the Lightning’s second Stanley Cup, their only other title coming in 2004. The Lightning, who returned to the Finals for the first time since 2015, saw 21 IHLC champions from six countries on their roster hoist the Cup, including captain Steven Stamkos, who only managed one period of play during these playoffs due to injury; assistant captains Ryan McDonagh and Smythe Trophy winner Hedman; Nikita Kucherov, who set a record with 27 assists throughout these playoffs; and star goaltender Vasilevski, winning a record 18 games in this unique playoff.

Our congratulations go out to the players, management and fans of the Tampa Bay Lightning, with those on the roster that have also held the IHLC highlighted in bold: