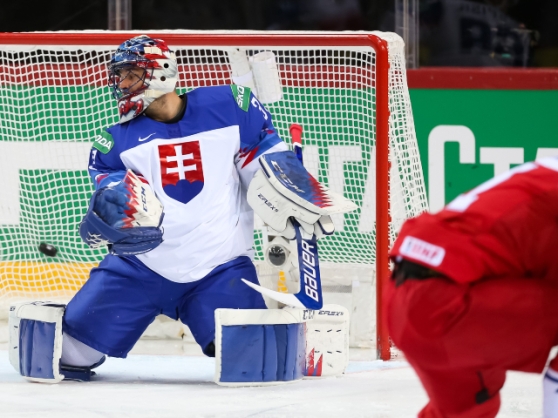 The Czech Republic thumped Slovakia 7-3 on Tuesday to surpass their brotherly rivals in Group A and finish third with 13 points. The Czechs will face Finland in Thursday’s quarter-finals. The Slovaks came fourth with 12 points and will take on the Americans.

Czech coach Filip Pešán commented on Finland: “It’s a well-organized team. They are highly skilled and well-coached, so we can’t make any mistakes against them. They’re the defending World Champions, so it’s gonna be tough, but I think we can beat them. We played them pretty evenly during the season and we won the last time we played, so it should be good.”

Filip Zadina, Michael Špaček, Libor Šulák, Matěj Stránský, and Libor Hájek led the way for the victors with a goal and an assist apiece.

Right now, the Czechs are full steam ahead with a five-game winning streak after a shaky start to the 2021 IIHF Ice Hockey World Championship with losses to Russia and Switzerland.

“It’s always nice to win against Slovakia, and we’re so happy we could have this game right before the quarter-finals,” said Zadina. “We’re really glad for the win and hopefully we’ll keep it going like that.”

The Slovaks, who won their first three games in Rīga, have struggled since falling 8-1 to the Swiss, posting just one more win versus Denmark (2-0). However, this is the first time they’ve cracked the quarter-finals since 2013, so that’s a triumph in itself.

“We’re thrilled to have this opportunity,” said Slovak coach Craig Ramsay. “Unfortunately, I guess we were a little bit too thrilled. We tried to warn our players not to be looking ahead, to be concentrating on our system of play, how we play, and for each person to go out and compete all night long. And it didn’t take very long for us to make a couple of mistakes and give up a goal. We just never really got our game going.”

On Tuesday, the Czechs rested key players ahead of the quarter-finals, including captain Jan Kovář, Dominik Kubalík, Jakub Vrana and Filip Hronek. It didn’t matter much, as they controlled this game tactically.

“We’ve been playing well the last few games and I think it was important to keep playing the right way, to not develop bad habits and to win, to keep the feeling on the team high,” said Pešán.

In goal, Pešán went with backup Roman Will, who came in unexpectedly to make the final shootout save in the 2-1 win over Denmark on Monday. The Traktor Chelyabinsk netminder also recorded 18 saves in the 6-1 win over Great Britain. Ramsay gave Július Hudáček his fifth start, although he’d be pulled after allowing four goals on 19 shots.

For these two nations, the upcoming quarter-final matchups are rarities. Slovakia downed the U.S. 4-1 in the 2000 quarter-finals en route to its historic first medal (Silver) in Saint Petersburg. Jan Marek’s shootout goal lifted the eventual champion Czechs to a 2-1 win over Finland in the 2010 quarter-final in Cologne. And the host Czechs beat the Finns 5-3 in the 2015 quarter-finals in Prague.

Just 29 seconds in, Zadina drew first blood on a quick shot from the right faceoff circle. It was the Detroit Red Wings forward’s second goal of these Worlds.

Zadina took the role of playmaker on the 2-0 goal at 15:04, picking off a bad pass up the middle by Slovak defender Mário Grman and dishing a backhanded feed to Špaček, who made no mistake.

“If you start making turnovers, those little chip ‘hope’ passes against a team like the Americans, it’s gonna be a long night, even longer than this one,” Ramsay noted.

At 2:49 of the second period, Lukáš Radil redirected defenceman Andrej Šustr’s wrister from the side boards through Hudáček for a three-goal lead.

Matúš Sukeľ gave Slovakia a little life when his first goal of these Worlds cut the deficit to 3-1 at 6:53. Sukeľ gobbled up Šustr’s defensive-zone giveaway and deposited a backhand deke past Will.

“We lost the faceoff and my colleague Martin Faško-Rudáš did a great job,” said Sukeľ. “I got the puck, I turned around, and I scored on the backhand.

To start the third period, Slovakia’s Adam Húska replaced Hudáček in net, but it made no difference. Another Slovak giveaway, this time by forward Kristián Pospíšil, enabled Matěj Stránský to make it 5-1 with a big slapper at 3:31. At 5:47, Czech forward Matěj Blümel got his first goal of the tournament with a nifty bad-angle shot.

Martin Bučko scored another one for the Slovaks with a heavy drive from the blue line at 8:45. Pospíšil got a little redemption for his earlier gaffe by hammering home the 6-3 goal with 1:03 remaining. Peter Cehlárik assisted on that goal, pushing him (5+5=10) into a tie for the tournament points lead with Canada’s Connor Brown (2+8=10).

In the spirit of “Why not?”, Ramsay pulled Húska for the extra attacker, but Hájek rounded out the scoring at 7-3 with an empty-netter at 19:43.

Slovakia’s last win over the Czech Republic was 3-1 in the 2012 semi-finals in Helsinki. The Slovaks earned the Silver medal that year with a 6-2 final loss to Russia, while the Czechs edged host Finland 3-2 for Bronze. 2012 marked the last time either nation has medalled at the Worlds. Both sides are hungry to make more positive history in 2021.

“I’m sure everybody realizes now what we did wrong today and we’re going to be ready for the next game,” said Slovakia’s Marián Studenič. “We’ve just gotta start strong and be ready because we were sleeping today.”