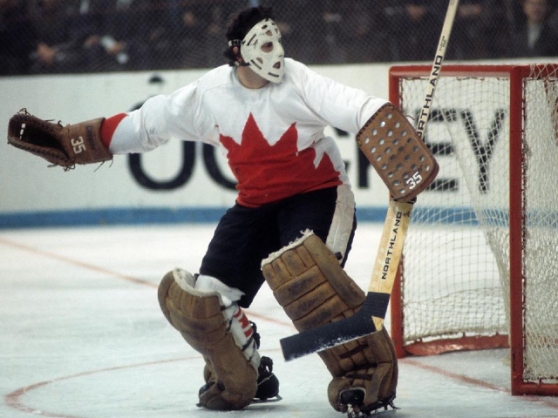 Anthony “Tony O” Esposito, the legendary Chicago Black Hawks goaltender who was a three-time Vezina Trophy winner, and one of the backstops in Canada’s historic 1972 Summit Series, today died of pancreatic cancer at the age of 78.

The younger brother of power forward Phil Esposito, “Tony O” broke into the NHL following a successful college career at Michigan Tech, debuting with the powerhouse 1968-69 Montréal Canadiens in a backup role, winning the Stanley Cup in his rookie season. Esposito was claimed by Chicago in the 1969 Dispersal Draft, where he would spend his remaining fifteen NHL seasons in the Madhouse On Madison, becoming the team’s all-time leader in goaltending games played (873), wins (418) and shutouts (74). Esposito won the Calder Trophy in his debut Chicago season, was a three-time Vezina Trophy Winner, and was named to the NHL’s First All-Star Team three times. An inductee to the Hockey Hall Of Fame in 1988, Esposito served as GM of the Pittsburgh Penguins for two seasons, before joining his brother with the expansion Tampa Bay Lightning in 1992, heading up the scouting department until 1998. As part of the NHL’s centennial celebration in 2017, “Tony O” was named alongside Phil in the “NHL 100” list, celebrating the top 100 players in the first century of the NHL.

In an era when professional players could not play in IIHF tournaments, it was the legendary 1972 Summit Series when Esposito, alongside brother Phil, was able to pull on the red and white for Team Canada, splitting goaltending duties with Ken Dryden. Esposito would notch a 2-1-1 record, winning Games Two and Seven. Five years later, Esposito was part of the first Canadian squad to return to the IIHF World Championship following a nearly decade-long boycott, winning Bronze in the team’s return to the Worlds. For his third and final international appearance, Esposito, who grew up across from the U.S. border in Sault Ste. Marie, Ontario, and spent all but two seasons of his career in the United States, became an American citizen and suited up for Team USA at the 1981 Canada Cup, starting five games as the U.S. finished fourth.

Our condolences go out to the Esposito family, as well as the extended hockey community across North America, on the death of this legendary goaltender and hockey figure.