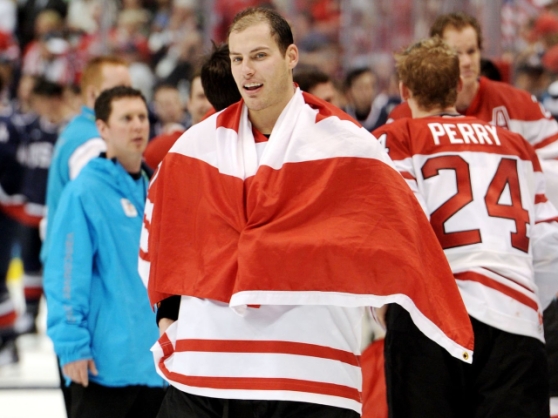 Canadian forward Ryan Getzlaf, the longtime captain of the Anaheim Ducks, tonight played his final NHL game after announcing his retirement following the end of the Ducks’ season, wrapping a seventeen year career highlighted by a number of team records, two Olympic titles and a Stanley Cup.

The 19th overall pick of the Ducks in the 2003 NHL Draft, Getzlaf joined the team full-time in 2005, spending his entire career with the franchise, retiring as the club’s all-time leading regular season (282 goals, 1,019 points) and playoff scorer (37 goals, 120 points), serving as the longest team captain and the franchise leader in games played (1,157 regular season, 125 playoffs). Captain of the Ducks for the last dozen seasons, Getzlaf is a three-time NHL All-Star (2008, 2009, 2015), and captured the Stanley Cup with the Ducks in 2007. Getzlaf retires currently ranked in the top 100 in the league’s all time assists and points list, a rare accomplishment to achieve with just one franchise.

A native of Regina, Saskatchewan, Getzlaf first suited up for Team Canada at the 2003 Under-18 championships, debuting for the national Junior team at the 2004 World Juniors, settling for a surprising Silver. Getzlaf would return in 2005, on what many deemed to be the best team in tournament history, cruising through the tournament en route to their first of five consecutive Gold medals. Getzlaf debuted for the senior national team at the 2008 World Championship, capturing Silver in the first of two Worlds appearances, the second coming in 2012. Getzlaf appeared at two consecutive Olympics, helping Canada to Gold at both the Vancouver 2010 and Sochi 2014 Games, capturing Gold as well at his final international appearance, the 2016 World Cup of Hockey in Toronto.

Despite all his early career success, Getzlaf would not actually capture the IHLC until the 2010 Olympics, winning thrice more in alternating years, at the 2012 Worlds, 2014 Olympics and just prior to the 2016 World Cup. We wish Ryan and his family the very best for his retirement and the things to come!