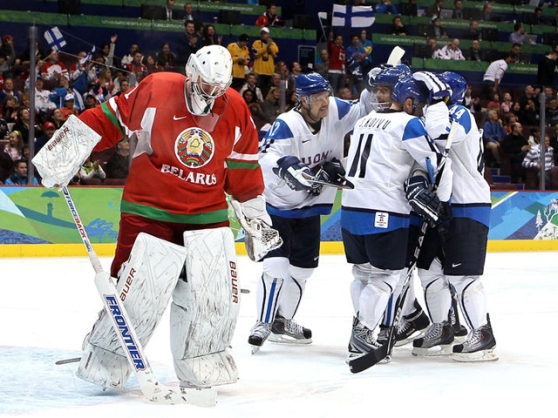 Fully aware this likely will be the final Winter Olympics for several members of Finland’s old guard, Niklas Hagman doesn’t intend to let anyone down.

Hagman scored twice, including a beauty while sliding on one knee, in leading Finland to a 5-1 win over Belarus on Wednesday in each team’s hockey opener at the Vancouver Games.

“There are a few guys that this might be the last Olympics, so we’re trying to play as well as we can to help them,” the 30-year-old member of the Calgary Flames said. “We know that they’re going to try their best to help the team’s success, so I hope it’s a good thing for us, because it’s a little extra for everybody.”

It’s fitting, then, that Finland’s all-veteran line had a hand in the opening goal scored 3:24 in.

Olli Jokinen, parked in front, converted Saku Koivu’s pass through the crease, while Teemu Selänne had the second assist. For Selänne, playing in his fifth Winter Games, the assist allowed him to match an Olympic record with his 36th career point. Valtteri Filppula and Jarkko Ruutu also scored, while Mikko Koivu had three assists.

“I’ve been lucky over the years to play with great players. It’s nothing more than that,” Selänne said, while acknowledging this will be his final Olympic appearance.

Sergei Kostitsyn, one of only three NHL players on the Belarus roster, scored his team’s lone goal. Goaltender Vitali Koval was the difference in keeping the game from becoming a blowout by stopping 40 shots.

“If we don’t have a goalie, we don’t have no chance,” Belarus captain Ruslan Salei said. “It’s tough to compete with their skill level and pretty much everything else. Obviously, we don’t have that horsepower that they have.”

Koval was the only one standing in the Finns’ way in a game Belarus was out-shot 28-4 through two periods and 45-12 overall.

He twice left Selänne shaking his head after robbing the Finn from in close. Koval’s best save came 2:30 into the second period. He squared up atop the crease to stop Ruutu’s rising blast from the high slot.

Koval, however, had little chance on any of the goals he allowed, particularly Hagman’s second, which put Finland up 3-1 with 3:08 left in the second period.

Intercepting a Belarus clearing attempt up the right boards, Hagman waltzed past two defenders to cut across the top of the crease and, as he was falling to the ice on one knee, still managed to sweep the puck inside the far post.

“I don’t know if I hit the guy’s stick or something and fell down, but I got a little lucky there,” Hagman said.

The Finns added two goals in the third period as they prepare to play Germany on Friday. Belarus will face Sweden the same day.

“We were tired,” Koval said. “That’s why they ran away with the game.”

For Finland, the only blemish came in the opening minute of the second period, when Kostitsyn capitalized on defender Lasse Kukkonen’s turnover behind the Finns’ net to cut the lead to 2-1 – on Belarus’ third shot on net.

This was an easy start for the Finns, who have drawn little attention as a possible medalists despite being stocked with NHL talent and having won a silver medal at the 2006 Turin Games.

Then again, Jokinen said, what else is new?

“Usually they rank us eighth place or seventh place, but somehow every time we come home with the medal,” Jokinen said. “We don’t really care what other people are thinking.”

The Finns join the Russians and Czechs as the only three nations to have won two medals since 1998.

Belarus’ popgun offense was so ineffective that Finland had nine shots after 12 minutes before Alexei Kalyuzhny finally got the first shot for Belarus, a 30-footer Miikka Kiprusoff easily turned aside.

“This showed we’ve got a lot of things to work on,” Salei said.

Belarus is ranked eighth in the world and is making its third Olympic appearance – its first since finishing fourth at the 2002 Salt Lake City Games.

There were pockets of Belarus fans at Canada Hockey Place. But they were clearly outnumbered by flag-waving and banner-carrying Finnish supporters clad in blue and white. There was even a face-painted trio of men wearing costumes resembling Finland’s flag.

NOTES: Selänne and teammate Jere Lehtinen are playing in the Olympics for the fifth time, more than any other players in Vancouver. The record is six, set in 2002 by former Finn star Raimo Helminen…NHL commissioner Gary Bettman watched the game from a suite.