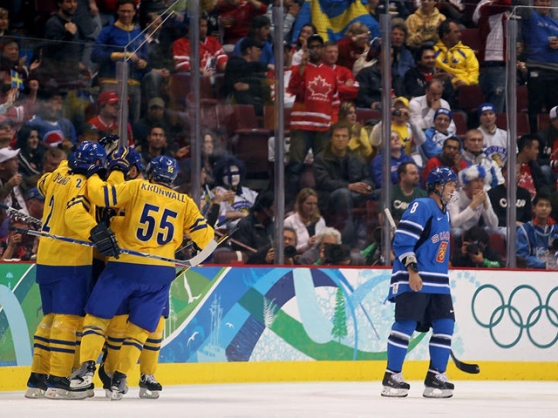 Loui Eriksson scored power-play goals in each of the first two periods as Sweden beat Finland 3-0 on Sunday night in a rematch of the Turin Games final.

Henrik Lundqvist had a 20-save shutout for the defending Olympic champion and Nicklas Bäckström scored the second goal, helping the Swedes win their group and earn a bye to the quarterfinals Wednesday as the second-seeded team.

“We start over again,” Lundqvist said. “It doesn’t really matter what we did this week. It’s going to be exciting.”

Sweden and the U.S. were the only teams to win all their games in regulation, but the Americans secured top seeding thanks to a better goal differential.

That puts the Swedes in the side of the draw that includes Canada and Russia. First up is a quarterfinal against either Slovakia or Norway.

“Before we face one of those two teams we have to beat another team,” Sweden coach Bengt-Åke Gustafsson said. “It’s not going to be an easy one in the quarterfinal.”

“If you have to lose one game, this is the one,” Finn forward Teemu Selänne said. “Now, the tournament starts.”

Selänne insisted he did not know the Finns sealed a bye before the game began, but said that was not of much consolation.

“I’m worried that we have to play better,” Selänne said. “We play like we did today, we have no chance.”

“They didn’t come out as hard as they can,” Franzén said.

The lacklustre game was a letdown on what was dubbed hockey’s “Super Sunday” after the first two games lived up to the hype. The United States upset the host Canadians and Russia beat the Czechs in highly entertaining games.

Sweden played its best game in the final of 18 preliminary games and Finland had its worst.

The Swedes beat Germany and Belarus by two goals each while the Finns routed those weak opponents by a combined score of 10-1.

That spoiled Sweden’s bid to become the top-seeded team when the final eight teams match up on Wednesday.

Finland avoided having to play a classification game on Tuesday because it routed Germany and Belarus.

The rival Swedes and Finns didn’t have a thriller as they did four years ago – when Sweden won gold with a 3-2 victory – but they did throw bodies and elbows around.

Finland’s Joni Pitkänen was ejected with a game-misconduct penalty late in the second period for a high hit on Patric Hörnqvist and will be suspended for the quarterfinals. Hörnqvist crumpled to the ice and needed to be helped off the ice before walking slowly toward the dressing room.

Hörnqvist had been penalized for tripping earlier. Sweden’s Niklas Kronwall got away with a vicious, open-ice hit on Niklas Hagman without a penalty.

The Finns had chances to get even on the scoreboard with a pair of 5-on-3 power plays in the second period, but got only one shot off during each opportunity.

Finland has not beaten Sweden at the Olympics since the quarterfinals of 1998 Nagano Games.