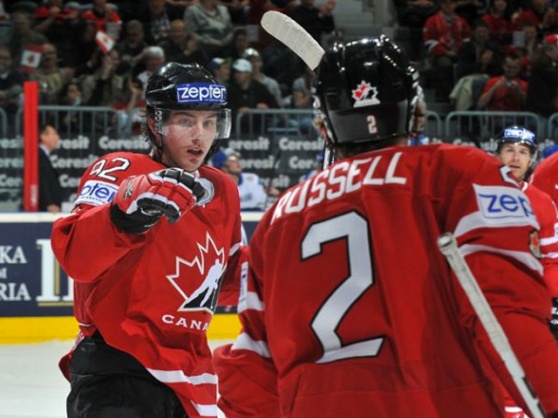 Matt Duchene and Steven Stamkos had a goal and assist each to lead Canada to a 5-1 win over Italy today at the SAP Arena in Mannheim. Elder statesman Ray Whitney, who celebrated his 38th birthday today, chipped in with two assists as well.

The opening game win at the World Championship in Germany gives them the first three points of play in the Group B standings.

“I was pretty happy with how things went with our line,” Duchene said of the combination he played on with Whitney and John Tavares. “We connected right away. Razor (Ray Whitney) had a great game. We created some stuff. As a team, we started a bit slow. Big ice hockey is pretty different from back home.”

Canada opened the scoring just 2:43 into the game as Stamkos tried a wraparound. Goalie Adam Russo made the save but Corey Perry pushed home the rebound from in close.

Soon enough, though, Canada was on its heels thanks to a pair of penalties that saw the Azzurri gain a lengthy 5-on-3. They thought they had scored at one point, but video review showed the puck hadn’t crossed the goal line. After one Canadian player came back on the ice, Italy took a penalty to nullify the advantage.

Nevertheless, the Italians tied the game at 12:44 on a great one-timer from the point by Michele Strazzabosco. Canadian goalie Chris Mason was a little slow to get over on the cross-ice pass.

Mason made up for it a little while later when he made a fine save off Nicola Fontanive on a partial breakaway while short-handed. Mason cut off the angle nicely and left the Italian with little room.

The Italians skated hard and had some good rushes, but Canada got the final goal of the period on a late power play. Ray Whitney came down the right side, faked a shot to freeze Russo, and slid a lovely pass to Kris Russell to the back side of the goal.

Duchene made it a 3-1 game at 5:57 of the second when he took a nice little pass again from Whitney inside the Italian blue line and ripped a shot to the short side, surprising Russo.

“Ray’s a guy who likes to slow things down a bit, and I like to speed them up,” Duchene noted. “He slows things down, pulls the other team to him, and then dishes to me. That’s what happened on my goal. He’s more of an east-west guy and I’m more of a north-south.”

Canada made it 4-1 on a delayed penalty, Duchene in the thick of it again. He got to a loose puck behind the Italian goal and made a nice pass to Steven Stamkos right at the blue ice. Stamkos just redirected the puck past Russo.

The Italians could take some measure of satisfaction from the period as they killed off a 4-minute minor to Strazzabosco combined with a single minor to Fontanive which gave Canada a full two minutes with a 5-on-3. Despite several one-timers from Stamkos, Canada could not extend its lead.

Canada played a solid but unspectacular third period, and the Italians were outmatched and unable to mount any sort of rally. Rene Bourque rounded out the scoring with a late goal, his quick snap shot flying past a screened Daniel Bellissimo, who started the period in relief of Russo.

Despite the goal, Bellissimo might have earned a start in the next game for his fine period.

“Overall, we did some things well, Stamkos said. “It’s a good win for us. We’ll take it, but we have things to improve on: making smarter plays with the puck, getting pucks in, going in on the forecheck instead of making those pretty plays. It’s difficult when you’re playing with some great players. You want to make some good plays. But at the end of the day, when we scored, it was getting pucks to the net, getting traffic in front, getting some dirty goals. Once we realized that, we scored some goals.”

Canada next plays on Monday night against Latvia while earlier that day Italy and Switzerland square off.