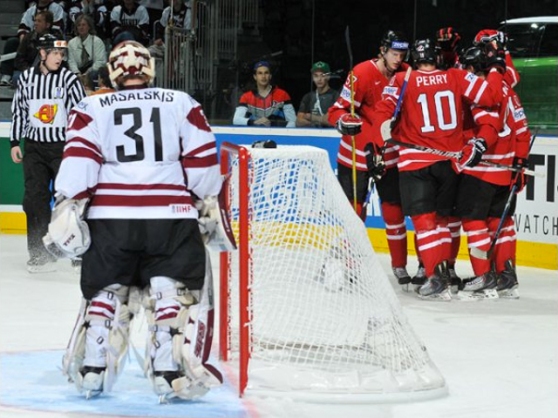 The kids may have been alright two nights ago against Italy, but tonight Canada’s kiddie corps skated to a much more impressive and confident 6-1 victory over Latvia in Group B action at SAP Arena.

Canada got two power-play goals in the first period and two more in the second en route to the victory. John Tavares had two of those extra-man goals while Corey Perry had three assists. The team was without captain Ryan Smyth who suffered a tournament-ending ankle injury in the first game.

“Special teams are huge,” said Steven Stamkos. “We scored some key power play goals. Our penalty-killing was great, and our goaltending was great. It was a really important game for us.”

The win keeps Canada atop the group’s standings, tied with Switzerland on points but getting the superior position because of goal differential. It also assures Canada a place in the Qualification Round. The loss leaves Latvia winless in two games and in a precarious position for the team’s final game against Italy, the winner moving on, the loser going to the Relegation Round.

Of course, this being a Latvia game, the drums were out, the chanting in full voice. Unfortunately, the partisan Latvian crowd had little to cheer for as their team was swamped by a more confident and polished team than the one that beat Italy 5-1 two nights ago.

The first goal was a thing of beauty. Kris Russell saw John Tavares along the goal line and made a quick pass, and Tavares, from a nearly impossible angle, drilled a high shot past Edgars Masaļskis on an early power play.

The second goal was something similar in every respect but from the opposite side. On the power play, Russell fed Stamkos on the left side and he ripped a one timer past Masaļskis at 18:19 just as he had done so many times this past season in sharing the lead for most goals in the NHL.

Mason was tested early in the second and was forced to make his best save off a one timer from Mārtiņš Cipulis, but he kicked out his left pad to keep Canada’s two-goal lead.

After that, Canada pulled away. The Olympic champions came right back and made it 3-0 on another power play. This time it was a Mark Giordano point shot that beat Masaļskis cleanly while he was screened.

Canada made it four power-play goals just a couple of minutes later when Tavares got his second of the night, banging home a great cross-crease pass on the backhand from Perry. The goal prompted a change in net as Masaļskis came out in favour of Mārtiņš Raitums.

Steve Downie made it 5-0, and although it was an even-strength goal it came on a delayed penalty with Mason racing to the bench for the extra attacker. He didn’t get there before Downie banged in a loose puck, the first shot of the game for Raitums.

Giordano finished off the scoring in the second during a 4-on-4. He walked in from the point and beat Raitums point blank with a shot between the pads.

Canada was in complete control of the third and coach Craig MacTavish gave backup goalie Chad Johnson the 20 minutes of play. He allowed the only goal, to Georgijs Pujacs, midway through the period.

“We’re all about the Maple Leaf here,” Mason said. “(Coach Craig) MacT came to me and told me, “That’s enough. Johnny (Chad Johnson) is going in.” I was actually really happy for him. It’s his first time, and I know what that feels like, since I had my first opportunity last year. He was pretty excited.”

“It’s always been a dream of mine to wear the Canadian jersey,” Johsnon said with a big grin. “To get the opportunity to go out there in the third period with such a big lead, it was a little more comfortable.”

Group B round-robin play concludes on Wednesday with two games. Italy and Latvia meet in the crucial matinee, and in the night match Canada and Switzerland hook up to determine first place.

NOTES: Ray Whitney was the Canadian player who performed the ceremonial exchange with Latvian captain Herberts Vasiljevs before the game, but there is no word yet whether he, or someone else, will assume the captaincy now that Smyth is done in Germany with an ankle injury.

“It’s obviously tough when you lose your captain, when you lose a veteran guy like him,” Stamkos noted. “He’s great in the dressing room. He leads by example. He’s won before. Still, we have other guys that are capable of stepping in.”