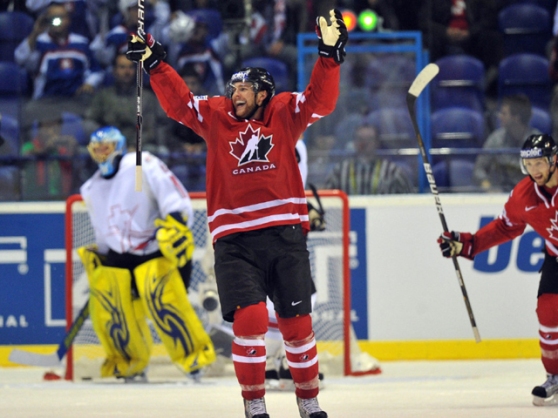 Alex Pietrangelo scored at 4:14 of overtime to give Canada a 4-3 win over Switzerland on day five of the 2011 World Championship. Pietrangelo picked up his own rebound after Swiss defenceman Luca Sbisa had blocked his initial shot. The puck came right back to Pietrangelo, who buried it behind Swiss goalie Leonardo Genoni. The Canadian celebration was on – albeit, accompanied by a big sigh of relief as well.

“The guy took a shot and it hit a stick and then he got it back and put it in on the short side,” said a dejected Genoni, who was making his first ever start in a World Championship game. “I played it defensively and was too far back in my net.”

With the win, Canada finishes in top spot in Group B with 8 points, the Swiss finish in second place with 6 points.

It was a great finish and another close game between two increasingly tense rivals. The Swiss recovered from a poor second period and battled Canada all the way to the finish.

“We knew they were going to come out and play really hard and physically,” said Canadian assistant captain Dion Phaneuf. “They’re fast and they can score. It’s a big win for our team. We gave up a little more than we would have liked.”

Chris Stewart looked as though he’d nailed down the win for the Canadians when he picked up a loose puck in the low slot and hammered it in behind Genoni with 3:44 remaining in the third period to give Canada a 3-2 lead.

However, Switzerland quickly regrouped and pushed back to tie it up 1:52 later. Julien Vauclair passed the puck out from behind the Canadian goal right onto the tape for Andres Ambühl, who finished with a quick shot that beat Canadian goalie James Reimer.

“We gave up that late goal and we weren’t happy about that,” Phaneuf continued. “But to respond and come back and win the game showed good character.”

It was a wild, back and forth third period after Canada had dominated the second, and entered the third with a 2-1 lead.

Matthias Bieber had a chance to tie it up for the Swiss 4:29 into the third, but missed a penalty shot he had been awarded after he was slashed by Phaneuf while breaking in towards the goal.

The Swiss persisted and were rewarded 3:39 later when Félicien Du Bois’ wrist shot from the right point found its way past Reimer to tie the score at 2-2. Switzerland’s Ivo Rüthemann was battling in front with Phaneuf, and Reimer didn’t have a great look at the shot as it was coming in.

In the second period things looked a little bleak for the Swiss. With 3:09 remaining in the period Morris Trachsler put the puck into his own net to give Canada a 2-1 lead. The Swiss defence then came unhinged for the remainder of the period, giving up a couple of good scoring chances – the best to Rick Nash, who snuck in behind the defence and broke in on Genoni.

Canada dominated most of the period, outshooting Switzerland 24-7.

The first period saw a nice exchange of chances in the first ten minutes – Switzerland’s Thibaut Monnet with a nice shot from the top of the left circle at one end… followed by Jeff Skinner’s soft hands tipping the puck just in front of Genoni. There was a nice pace to the game.

Switzerland took a 1-0 lead at 12:29, when Raphael Díaz’s shot from the left side found its’ way past Reimer. The puck skipped just above the ice and it appeared as though the goalie was either screened or didn’t expect a shot.

In the last couple of years Canada has learned to take the Swiss lightly at their peril. The Canadians needed overtime to defeat Switzerland at the Vancouver Olympics and were stopped 4-1 by them at last year’s World Championship. They can add today’s encounter to the file.

“That was a pretty good test for us,” said Canada’s John Tavares. “You try to win every game and learn a little bit more about yourself.”

NOTES: Switzerland are running into problems on the blueline – Goran Bezina is finished for the tournament with a shoulder injury…veteran defenceman Mathias Seger missed the game against Canada with a lower body injury, but will likely be back for the next game…Swiss management will add another defenceman to the roster for the Qualification Round.