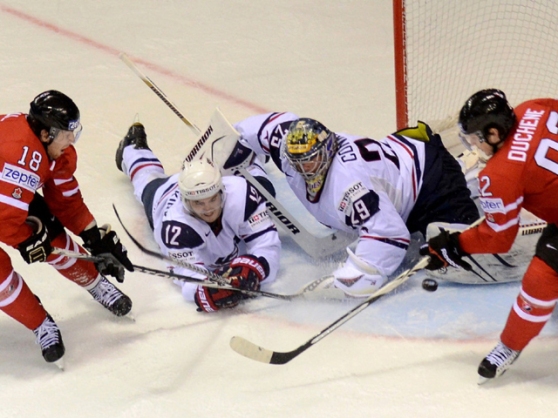 Jordan Eberle and Rick Nash both scored for Canada in the shootout, as Canada won 2-1 in shots and won the game 4-3 against the USA in Qualification Round play in Kosice at the 2011 IIHF World Championship.

Canada and the USA battled through 60 minutes of regulation time, then another five of overtime before Eberle and Nash settled the issue in the shootout. Jack Johnson and Blake Wheeler each missed on the U.S. shots.

Nash’s winner featured a nice move to his backhand, before he roofed it up and in behind USA goalie Ty Conklin, who was peppered with 52 shots by Canada. The USA had only 20 shots on goal.

“I didn’t know what I was going to do at first,” said Nash, talking about his winning goal. “I knew the angle I was going to come in at, and then see what he gave me. He gave me a little bit on the glove side and I saw the opening.”

“I’d like to have that one back, for sure,” said Conklin.

It was one of those games that unfolded like a good play – with the best stuff coming at the end, but being set up nicely in the preceding acts.

The USA was leading 2-1 early in the third period before Canada tied the score at 3:27 in dramatic fashion. Just as a boarding penalty to the USA’s Chris Porter was coming to an end, Canada’s Marc-André Gragnani shovelled the puck from the left side to John Tavares, lurking in front. Tavares batted the puck towards the goal from right in front and Conklin got a piece of it. As it bounced near the net, amidst a maze of sticks and skates, Tavares swatted at it and knocked it in to tie the game at 2-2.

One minute and fifty-five seconds later, during a Canadian four on three man advantage, veteran Jason Spezza moved towards the right face off circle, as he took a pass from Tavares, and hammered the puck past Conklin to give Canada a 3-2 lead.

“Their goalie played pretty well,” said Spezza. “He was unflappable. But we knew if we stayed patient, we’d score some goals.”

Next it was Canada’s turn to suffer the consequences of a penalty. Canadian Cal Clutterbuck went off for slashing at 10:43 of the third period and, 34 seconds later, Wheeler found Derek Stepan in front of Canadian goalie James Reimer. Goal. Tie game, again.

The USA opened the scoring at 4:13 of the second period. Mike Komisarek fired a weak shot from the right point that just floated its way in and dropped down and past Reimer.

Canada tied the score at 1-1 at 7:20 of the second period. Just as a power play was ending, Brent Burns charged towards the slot from the left point and lunged towards the a pass from Alex Pietrangelo, who was parked deep on the right side. Burns made contact as he was going down and fired the puck into the right corner behind Conklin.

The nicest goal of the period came at 13:47 when the USA took a 2-1 lead. It was all about timing – good for the USA, not so much for Canada. Canada’s Chris Stewart turned the puck over to Wheeler right by the U.S. blue line just as the USA’s Jack Johnson was stepping out of the penalty box. Wheeler zipped the puck up to the wide-open Johnson, who moved in on Reimer, cut across in front of him, went to the backhand and steered the puck through his legs.

“I thought we had a good second period, just a couple of bad bounces,” said Nash afterwards. “But we had a great third and scored a couple of goals. But we have to learn how to finish games and not let those goals in in the last ten minutes.”

The sell-out crowd at Kosice’s Steel Arena got exactly the kind of start you’d expect from a Canada-USA match-up – fast-paced, a couple of punishing hits and good scoring chances.

Canada’s Marc Methot set the pace 54 seconds into the game when he crushed USA defenceman Kevin Shattenkirk along the glass in the right wing corner in the Canadian zone. Shattenkirk was on the ice for a few moments but got up and skated off under his own power. The hit was reciprocated 18 second later when the USA’s Komisarek nailed Burns, taking a roughing penalty in the process.

As it turned out, the drama was just starting.

The win moves Canada into sole possession of first place in Group F with seven points (one wins, two OT win). The USA has four points (one win, one OT loss and one loss).

“Yesterday (Thursday) was the first day we’d had off in a while and I think we were a little rusty in the first period,” said Nash. “But we’re right back at it tomorrow so we have to get it going again.”