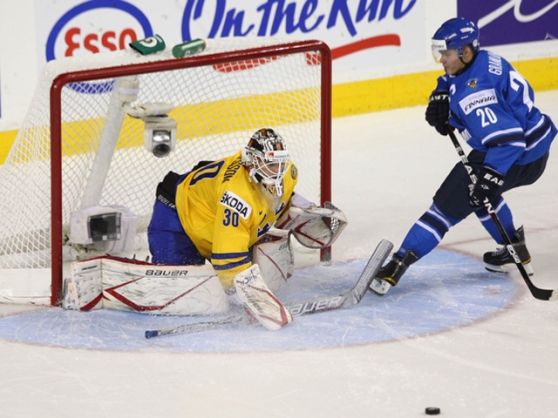 Sebastian Collberg and Max Friberg scored in the shootout as Sweden rallied from a two-goal deficit to beat arch-rival Finland 3-2 in Tuesday’s first semi-final. The Swedes will face the winner of Canada–Russia for gold, while the Finns take on the loser for Bronze.

“From the very beginning, I knew exactly which move I wanted to do,” said Collberg of his goal. “We never stop battling. We are a very tough team to play against for 60 minutes.”

“We saw that the Finns were totally spent physically at the end,” said Friberg, whose heroics have been a constant here in Calgary. “We were much stronger in overtime and obviously in the shootout.”

As any Finnish fan will tell you, this was a classic heartbreaker for Finland versus their nemesis. Captain Mikael Granlund had a chance to deadlock things in the shootout, but on what was Finland’s final attempt, the three-time World Junior participant simply lost the puck while cruising in on Sweden’s Johan Gustafsson.

In front of 15,690 fans in Calgary, Sweden’s William Karlsson scored a power play goal in the third period, and Max Friberg, with just 1:44 left on the clock, notched the equalizer with his eighth of the tournament. Alexander Ruuttu and Joel Armia scored for Finland in the first and second periods.

“I was entirely convinced that we would turn this game around,” said Swedish head coach Roger Rönnberg. “For the most part, I felt this was our game. You don’t win a tournament like this by playing well all the time. You win this tournament by picking the right games to win.”

Finnish goalie Sami Aittokallio, despite struggling at times with rebound control, was heroic between the pipes as Sweden outshot Finland 58-24. But he still lost the goaltending duel with Sweden’s Johan Gustafsson, and was in tears during his post-game interviews. He gave away the puck on Friberg’s tying goal, and was inconsolable, throwing his mask to the ice while being recognized as Finland’s Player of the Game.

Recently, the Swedes settled for Silver in 2008 and 2009, losing twice to Canada in the final, and claimed Bronze versus Switzerland in 2010. They’ll try to get some vindication by winning gold on Canadian ice on Thursday night. Tre Kronor has only claimed the World Junior title once, back in 1981.

The Swedes said different things about who they’d prefer to play in the final. “I don’t have any wished-for opponent,” said Rönnberg. “But it would be great to beat Canada in Canada.” Collberg opined: “I’d rather play Russia because we have a psychological edge over them right now.”

Regardless of the opponent, Rönnberg said some things wouldn’t change: “We want to control the game. We want to play our game and force other teams to make adjustments the way we play.”

The tenacious Finns, who got zero power plays to Sweden’s three, focused on bringing five men back. There was no cheating in the neutral zone, and few opportunities for the Swedes to get an odd-man rush and unleash their offensive potential – that is, until the third period.

“I thought we played really well for most of the game,” said Finland’s Teemu Pulkkinen. “They got one good bounce and were able to tie it up at the end.”

The Saddledome organist pumped out a rendition of Led Zeppelin’s viking-themed “The Immigrant Song,” about three minutes in. But even though the Swedes held a territorial advantage, outshooting Finland 14-6, it wasn’t exactly a Viking-style war. It started off as a tactical, tight-checking affair with few bona fide chances.

The Finns were the first to unsheathe their swords. With under two minutes left in the first period, Miro Aaltonen swooped behind the Swedish net. He deftly centred the puck past Gustafsson’s right post and through defenceman Jonas Brodin’s legs to Ruuttu, who shot high from directly in front, making no mistake for his third goal of the tournament.

Finland singled out Friberg for special physical attention, with Teemu Pulkkinen tagging him repeatedly with stiff bodychecks. Pulkkinen also laid out Brodin in the Swedish end.

Markus Granlund took the game’s first penalty at 7:30 of the second period in the Swedish end. The Swedes came close when Mika Zibanejad rang the puck off the post. The Finns were meticulous about clearing pucks away.

A juicy rebound nearly betrayed Aittokallio with less than eight minutes remaining in the middle frame, but he lunged across, extending his left pad to prevent Zibanejad from banging in the loose puck.

The opportunistic Finns struck again at 15:30 to make it 2-0. Armia stripped Swedish assistant captain Joakim Nordström in front of the Swedish net, and before Nordström or D-man Oscar Klefbom could recover, Armia beat Gustafsson high over the glove.

In the third period, the Swedes got their second man advantage when Simo-Pekka Riikola pulled down Filip Forsberg behind the Finnish net. Sweden caught a break at last at 3:11, when William Karlsson went hard to the net after Johann Larsson’s hard blast and the rebound went in off his skate through Aittokallio’s legs to make it 2-1.

Tre Kronor continued to pressure the Finnish net till the bitter end. They called a timeout to plot strategy with 2:38 left. At last they found a chink in their opponents’ armour when Aittokallio’s pass behind the net was picked off by Sundström and centered to Friberg, who fired into the gaping Finnish net.

Overtime settled nothing, although the Swedes continued to dominate 4-on-4, and it was off to the shootout.

“We were a little bit tired as the overtime went on, since we played yesterday,” said Pulkkinen. “So at first we tried to score, but after a while, we were happy to go to the shootout.”

Sweden won the right to shoot first, and it unfolded as follows (according to the IIHF game-winning shots procedure, in which three different shooters from each team take alternate shots until a decisive goal is scored–and if the game is still tied after three shots by each team, the GWS continues with a tie-break shootout by one player of each team, with the shooting order reversed):

Armia mimicked Friberg’s colourful goal-scoring celebration from his shootout marker versus Switzerland, but the Swedish forward got the last laugh when he scored the deciding goal.

“I heard that everyone was booing me, but my focus was on the goaltender, and I saw that his five-hole was open,” Friberg said of his tally. “This is where I put the puck.” As for Armia’s celebration? “I saw it as a tribute to me.”

Finland last won gold at this tournament in 1998, defeating Russia on home ice in Helsinki. Its only other World Junior Gold came in 1987, when both Canada and the Soviets were disqualified for brawling.

“When we came to this tournament, we wanted to win every game,” said Pulkkinen. “So today is a disappointing day.”