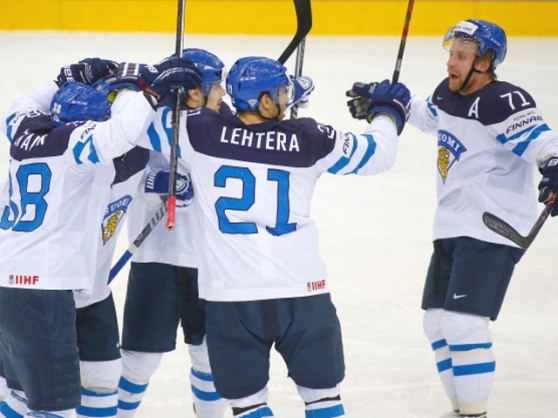 Suomi is smiling. Finland edged Canada 3-2 on Thursday to advance to a semi-final clash with the Czechs. Iiro Pakarinen tallied the winner with just 3:08 left.

Jori Lehterä grabbed a turnover at the Canadian blue line and fed an oncoming Pakarinen, whose shot along the ice beat Canadian netminder Ben Scrivens through the five-hole.

Canadian defenceman Tyler Myers, who gave the puck away, said: “Everybody knows what happened there, it’s pretty obvious. I don’t think I need to explain it.”

The Finns barely made the playoff round, requiring a Swiss win over Latvia to make the quarter-finals. But now coach Erkka Westerlund’s unheralded troops are one step closer to winning Finland’s first medal since capturing gold in Slovakia 2011. They rallied from a 2-1 deficit heading into the third period.

“We got a good start in the first period, but in the second period Canada was very strong,” said Westerlund. “In the third period, we found the mental strength. We call it ‘sisu’ (in Finnish). I am very proud of my team.”

Lehterä assisted on all three Finnish goals. Juuso Hietanen potted a goal and an assist for Finland, and Olli Palola scored as well.

“We deserve to be here and we still feel we can get better,” said Finnish captain Olli Jokinen. “We can play without nerves in the semi-final.”

“I’ve not seen much of the Czechs, but it’s going to be a tough game,” said leading Finnish scorer Petri Kontiola. “They have lots of skilled guys out there.”

Despite its enormous NHL depth, Canada hasn’t been able to deliver in must-win games at the Worlds this decade, unlike its golden runs at the 2010 and 2014 Olympics.

And that trend continues with the motherland of hockey’s fifth consecutive World Championship quarter-final exit. Canada’s last gold medal was in 2007 and its last medal of any shade was in 2009 (silver).

“It’s a tough situation for everybody,” said Canadian coach Dave Tippett. “It’s not the result you want.”

“Our goaltending has been the best in the tournament,” said Jokinen. “Pekka has been unbelievable, giving us a chance to win every night. He’s making saves at key times.”

It was precisely the kind of hard-working, grinding affair you’d expect between these two teams. They combined for 18 minutes of sin bin time, 12 minutes going to Finland.

Prior to the quarter-finals, Canada boasted the tournament’s second-best offense (28 goals) after Russia. Unfortunately, Tippett’s squad ran out of goals when they were most needed.

“For the most part, I thought our team played well,” said Tippett. “We controlled long portions of the game. We made a couple of mistakes that cost us the game. Our goal was to get better every day. That was probably the best game we’ve played here.”

Finland took four minors in the first period, and had to play 5-on-3 to conclude it, but Canada’s power play couldn’t convert despite good pressure. Brayden Schenn and Nazem Kadri both dinged shots off the post from close range.

The Finns capitalized at 6:14 on their first man advantage, moving the puck smartly around the perimeter until Palola powered a one-timer from the left faceoff past Scrivens on the short side.

At 5:41 of the second period, Turris drew Canada even in exciting fashion. He grabbed the puck near his own blue line and fed it up to Matt Read, who gave it back to the Ottawa Senators forward to hammer it high past Rinne on the glove side.

That spurred the Canadians on. Moments later, Kadri bulled his way toward the Finnish net and forced Rinne to make a sparkling glove save.

Scheifele gave Canada a 2-1 lead at 12:08 on a 2-on-1 rush with Joel Ward. He stripped Kontiola of the puck inside the Canadian blue line and then raced off, sending a laser under the crossbar from the right faceoff circle.

As the middle frame wore on, the Finns got more aggressive on the forecheck, with Jere Karalahti stepping up on Kevin Bieksa and Miikka Salomäki tagging Scheifele.

In the last minute of the second, Chimera had a glorious chance to give Canada a two-goal lead when Myers’ slap shot deflected crazily off the end boards and landed on his stick right in front. However, his attempt bounced off the inside of Rinne’s right post.

The Finns got the equalizer just 28 seconds into the third period when Hietanen stepped in over the blue line and unleashed a drive that hit Scrivens’ blocker but kept going and trickled over the goal line as the goalie lunged back helplessly. Like Pakarinen’s winner, it was a potentially stoppable shot.

“I’d like that one back for sure,” said Scrivens. “Those are tough ones to give up. I’ve got to make more saves for the team. I didn’t hold up my end of the bargain tonight.”

The checking tightened up. How long could this deadlock last? Canada was putting its fair share of pucks on net, but both Rinne’s glove and body looked huge.

“We knew it was a one-goal game and if we got a chance we could tie it up and if we got another chance we’d win it,” said Jokinen. “We stayed with our plan and good things happened.”

Canada pulled Scrivens for the extra attacker with 31 seconds left, but it was too late. For now, Sweden will remain the only nation to win both Olympic gold and World Championship gold in the same calendar year (2006).

For Westerlund, the victory had an extra dimension of sweetness: “My wife had a birthday today. I’ve been on the road so many days. It was a good present for her.”

Canada’s last World Championship meeting with Finland was a 5-3 round-robin win on 11 May 2012.

The result improved Finland’s all-time World Championship record against Canada to eight wins, two ties, and 34 losses. The last time these two sides faced off in a playoff round game was in the 2007 final in Moscow, where Canada won 4-2.

At the Sochi Olympics in February, Canada edged Finland in 2-1 in overtime in group play, going on to win gold. The Finns took the bronze.