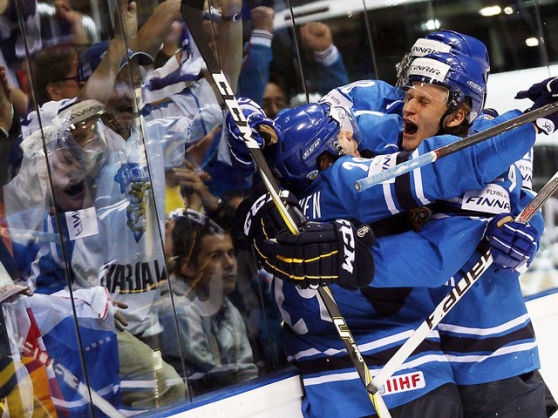 It is a great day in Finnish hockey history. In the latest chapter of hockey’s classic Nordic rivalry, Finland demolished Sweden 6-1 in the Gold medal game of the 2011 IIHF World Championship. Petteri Nokelainen scored the first of five third-period Finnish goals, and it stood up as the winner.

“This is the highlight of my career,” said Finland’s Sami Lepistö. “Of course, the Olympic Bronze last year was big, but this is the World Championship.”

In a duel of 2011’s top two goalies statistically, Finland’s Petri Vehanen got the best of tournament MVP Viktor Fasth as Sweden outshot the Finns 33-32.

The 16-year wait for Finnish fans is finally over. Finland’s one and only previous World Championship Gold came in 1995 in Stockholm with a 4-1 final win over Sweden, as the Finnish fans celebrated to the strains of the bouncy tournament theme song, “Den Glider In.”

“It’s easy to say now, but I knew after the semifinal win (over Russia) that we’d win the Gold,” said Tuomo Ruutu of Finland’s 2011 dream come true. “We didn’t change a thing. We kept on playing our own game.”

Jukka Jalonen got his first World Championship medal ever as head coach of the Finnish Lions, and it was the colour he was looking for.

“We had a great tournament,” said Jalonen. “It’s an honour to win Gold. We won many one-goal games here. This says a lot about the character of the team.”

Pär Mårts, who coached Sweden to World U20 Silver in 2008 and 2009, came away with second place again in his head coaching debut at the Worlds.

“The Finns were the better team,” Mårts admitted. “They played much better on defence and had more power. Nobody on the Swedish team played his best game. I’m proud that my team had a pretty good tournament. Not the best, but it’s a start for something better.”

This night, the attendance of 9,166 at Orange Aréna was evenly split among Finnish and Swedish fans, and their competing chants of “Suomi!” and “Sverige!” created a great atmosphere.

The Finns, showing the mental toughness they’ve shown all tournament long, didn’t crumble under adversity in the biggest game of the year. They delivered the most emphatic big-game win ever for a squad sporting Suomi sweaters.

After a tense, scoreless first period, Sweden got the first goal at 7:20 of the second when Pääjärvi unleashed a lightning wrister from the left faceoff circle that beat Vehanen high on the glove side.

Nokelainen took a boarding call on Oliver Ekman-Larsson on the forecheck at 14:25, and Sweden went to the power play. The Swedes came close to grabbing a two-goal lead when Patrik Berglund tipped Pääjärvi’s slap-pass off the post.

Finnish wunderkind Mikael Granlund drew a penalty late in the middle frame as he tried to dipsy-doodle through David Petrasek, who hooked him. And with seven seconds left before the buzzer, the Finns tied it on Immonen’s tournament-leading ninth goal.

A prone Mikko Koivu kicked the puck back up the left boards to Janne Pesonen, who got it to Immonen, and he stepped in from the left point and hammered it high past Fasth’s glove.

It was a critical moment. The Finns had seized the momentum heading to the third. “If they didn’t get that goal, it’s a different game,” said a regretful Mattias Tedenby.

The Finns just kept rolling. At 2:35 of the final stanza, Nokelainen broke in over the Swedish blueline alongside Pihlström, who sent him a neat pass on the left side, and he roofed it impeccably past Fasth’s stick.

At 3:21, the Finns went up 3-1 when Kapanen grabbed a loose puck to Fasth’s left after a partially blocked centering pass from Juhamatti Aaltonen and banged it in.

Halfway through the third, the Swedes called a timeout to regroup. But they couldn’t solve Finland’s tenacious checking.

The Finns got a ton of late insurance goals. First, there was a marker from Pesonen with 3:41 left, as he raced in to collect a Granlund shoot-in off the end boards and put a backhand deke past Fasth to make it 4-1. Pyörälä completely doused hopes of a Swedish rally when he potted another one from the right faceoff circle just 35 seconds later.

“I don’t know what happened to the Swedes, but they didn’t have a chance, did they?” said Lepistö.

Pihlström put the icing on the cake with a beautiful high shot with 55 seconds left. 6-1. Good night, Sweden.

“I’m just really disappointed we didn’t come up with a better third period when it mattered the most,” said Swedish captain Rickard Wallin.

“They scored five goals in one period, and that’s not supposed to happen to us,” said Pääjärvi.

The Finnish celebration was on, not only in the arena, but from Helsinki to Rovaniemi. Accepting their Gold medals from IIHF President René Fasel, the Finnish players saluted their fans, sang along lustily to their national anthem, and hoisted the trophy as if they couldn’t believe their time had finally come.

It is a refreshing pace of change for Finland, which had grown accustomed to heartbreaking losses to Sweden. Two recent examples include Sweden’s rallying from a 5-1 deficit to down Finland 6-5 in the 2003 World Championship quarter-finals in Helsinki, and Tre Kronor’s 3-2 victory in the 2006 Olympic Gold medal game on Nicklas Lidström’s early third-period goal.

“This team is full of fantastic guys,” said Ruutu. “I felt that we were a tight group and we did everything together as a team, on the ice and off it.”

Sweden’s last medal came in 2010 with a Bronze medal victory over the host Germans. Finland’s previous one also came at Sweden’s expense, a Bronze in Canada 2008.

Interestingly, 2011 marks the first year that Finland’s national team has not included at least one member of the squad that won Gold in Sweden in 1995.

The gold medal victory moves Finland up from fifth place to second in the IIHF World Ranking.

The two Nordic finalists are also the co-hosts of the IIHF World Championship in 2012 and 2013. Finland hopes to be defending its title when the next gold medal game is played in Helsinki on 20 May 2012.