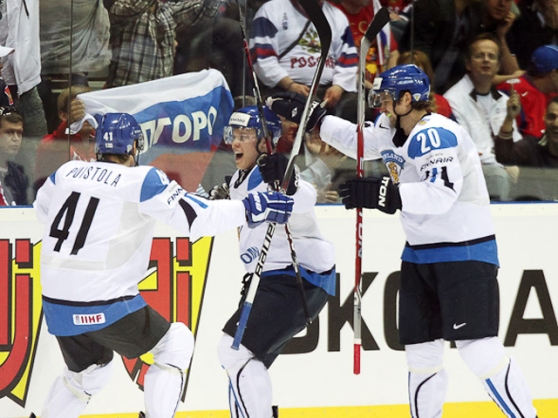 Mikael Granlund scored the jaw-dropping second-period winner as Finland blanked Russia 3-0 in the last semi-final and marched into Sunday’s gold medal game with Sweden. The Russians will face the Czechs for bronze.

It is the fourth Sweden-Finland final ever for this tournament. The Swedes won gold in 1992 and 1998, while Finland spoiled Tre Kronor’s home-ice party in 1995 and claimed its lone Worlds gold.

“We’re very happy to be among the best two teams in the world,” said Finnish head coach Jukka Jalonen. “We deserved it, as we played a very good game. Our power play worked well and our penalty kill worked well. That’s the reason we won today.”

The most famous confrontation between Sweden and Finland was at the 2006 Olympics in Turin, Italy, where Nicklas Lidström gave Tre Kronor gold with his early third-period goal in a 3-2 win. Sweden’s last Worlds gold came against the Czechs later that year.

“I actually liked playing against Russia better because I have a lot of teammates there,” said Vehanen, who toils for the KHL’s Ak Bars Kazan. “But Sweden will be special.”

“We played together, as a team,” said Finnish defenceman Jyrki Välivaara. “The Russians were more like individuals, and we played as a group. We had three guys working with the puck the whole time, and they had one guy with the puck. They can shield it well and move the puck and pass, but we defended really well.”

Jani Lajunen and Jarkko Immonen had the other Finnish goals. With a two-point effort, Immonen now leads the tournament in scoring with 11 points.

Versus the Czechs in Sunday’s early game, the disappointed Russians will play for their fifth consecutive medal. They won bronze on home ice in 2007, beat Canada in the 2008 and 2009 finals, and lost to the Czechs in last year’s gold medal game.

“We had a good first period, but after the first intermission the game was broken and we couldn’t play our own game,” said Russian coach Vyacheslav Bykov. “When Finland scored the 1-0 goal, we had some good opportunities, but unfortunately the puck didn’t go in and the Finns played better than us for two periods.”

It was a hard-hitting, hard-skating affair from the scoreless first period onward.

Off a faceoff in the Russian end in the second period, Finland drew first blood at 5:13 when Granlund beat defenders Dmitri Kalinin and Dmitri Kulikov behind the Russian net and scored using the famous “Mike Legg move” (or more recently, the “Sidney Crosby move”). The 19-year-old HIFK Helsinki forward picked the puck up on his stick blade while cutting around the net and wrapped it in high past Barulin’s blocker side.

The goal was video-reviewed to see if it was a high stick, but it stood, to the joy of the Finnish fans among the 9,272 at Orange Aréna. It was an unbelievably gutsy play for an elimination game, and arguably the goal of the tournament. Immonen got the assist.

“Wow,” said Finnish assistant captain Lasse Kukkonen of Granlund’s effort. “That’s all I can say. I knew he could do it. He’s done it before in Finland but I didn’t think he could do it at the World Championship. He’s amazing.”

“I’ve only seen those on YouTube,” added Juhamatti Aaltonen. “It was ridiculous. What a confidence he’s got.”

The Russians came close to equalizing a few minutes later, hitting the crossbar while Mika Pyörala was penalized for taking down Ovechkin. Later in the period, an Ilya Kovalchuk rush led to a fine slot chance for Sergei Zinoviev, but Vehanen smothered the puck.

Finland grabbed a 2-0 lead at 7:40 of the third period on a strange play. Lajunen rushed into the Russian zone, pounded the puck off the back boards, and backhanded the rebound home from a bad angle along the goal line.

Immonen tied Sweden’s Patrik Berglund for the tournament goal-scoring lead with his eighth, which came on the power play at 9:15. He took a beautiful Granlund pass from behind the goal line and sniped it inside Barulin’s left post to make it 3-0 Finland.

The Russians outshot Finland 17-6 in the third. They got a chance to spoil Vehanen’s shutout when Ossi Väänänen was given four minutes for cutting Maxim Afinogenov with a high stick. However, they failed to capitalize, as the Finns checked doggedly to chants of “Suomi!”

Russia did not pull its goalie for an extra attacker despite trailing by three as the clock counted down.

“It will be a great game,” said Immonen of the impending final. “We try to be a team that nobody wants to play against.”

Finland and Sweden will co-host the IIHF World Championship in 2012 and 2013.