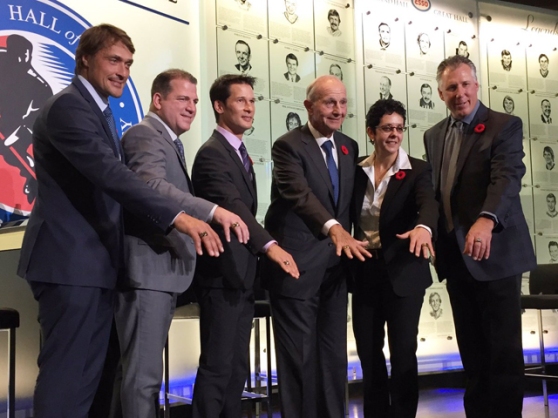 The Hockey Hall Of Fame tonight inducted their 2017 Class, inducting five legendary players to their ranks with a number of tremendous international achievements.

As first noted upon the announcement of the class in June, the Class of 2017 (and their corresponding achievements) are as follows:

🇫🇮 Teemu Selänne, “The Finnish Flash,” was a shoe-in for the Hall on his first ballot, after retiring in 2014 after 21 NHL seasons with Anaheim, Winnipeg, San Jose and Colorado, netting a Calder, Rocket Richard and Masterton Trophy, along with 10 All Star nods and a Stanley Cup. With the Leijonat, Selänne, arguably the greatest Finnish player in history, was named Finnish player of the year nine times, and collected four Olympic medals (one silver and three bronze), two World Championship medals (a silver and bronze), and was runner-up at the 2004 World Cup of Hockey. Selänne retires with the Olympic records for both the most tournaments played in (six) and total Olympic points (43), records sure to stand for years to come.

🇨🇦 Paul Kariya, a teammate of Selänne’s for many years in Anaheim, was the first true Ducks star, their first draft pick as a franchise in 1993. Despite a career shortened by concussions, Kariya spent 15 seasons with Anaheim, Colorado, Nashville and St. Louis, providing an offensive spark that saw him named a seven-time All Star, along with two Lady Byng Trophies. Kariya first came to attention, however, due to his performance on the international stage, as his shootout miss cost Canada Olympic Gold at the 1994 Lillehammer Games. Kariya would be vindicated, however, winning World Championship Gold later that season, followed by a clutch performance to win Canada’s first Olympic Gold in half a century at the 2002 Games.

🇨🇦 Mark Recchi was an instrumental cog of every team played for, spending 22 seasons with Pittsburgh, Philadelphia, Montréal, Carolina, Atlanta, Tampa Bay and Boston, holding the unique trait of winning three Stanley Cups on three separate teams – Pittsburgh (1991), Carolina (2006) and Boston (2011). Recchi was also a seven-time NHL All Star, and reached the 1500 point plateau in his final season. With Team Canada, Recchi won World Junior Championship Gold in 1988, and suited up at the 1993 and 1997 Worlds, winning Gold at the latter, and was named to Canada’s 1998 Olympic roster in Nagano.

🇨🇦 Dave Andreychuk, the definition of a journeyman, was a powerful presence throughout his 23-year career, adding firepower on the wing for Buffalo, Toronto, New Jersey, Boston, Colorado and Tampa Bay, ending his career as the all-time power play goal leader (274), in addition to being a two-time All Star, but is perhaps best remembered for captaining the Lightning to the first Stanley Cup of his 22 year career at age 41. A playoff constant throughout his career, Andreychuk only played for Team Canada twice, winning bronze both at the World Juniors in 1983 and the World Championships in 1986.

Also inducted into the builders category were Clare Drake, the longtime coach of the Alberta Golden Bears who also coached Team Canada at the 1980 Olympics, and Jeremy Jacobs, the longtime owner of the Boston Bruins. Our congratulations go out to these hockey legends on joining the Hall Of Fame!