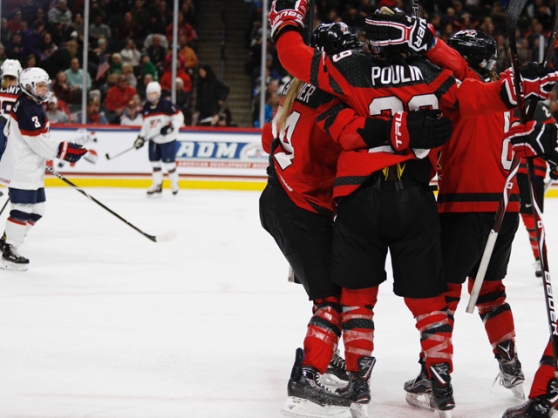 Brianne Jenner scored 37 seconds into overtime to lift Canada’s National Women’s Team to a 2-1 win over the United States on Sunday, and a 2-1 lead in the teams’ six-game pre-Olympic series.

Jenner took a pass from Rebecca Johnston and went top-shelf blocker side for her seventh career goal against the U.S.

Marie-Philip Poulin scored in regulation for Canada, on an assist from Meghan Agosta.

Shannon Szabados made 27 saves in the win.

After a goal-less first period, Megan Keller opened the scoring only 1:20 into the second period on a broken play. After her shot from the circle got caught in a teammate’s skates, Keller followed the play and scored glove side from the low slot.

Canada finally got on the board with just over two minutes remaining in the middle period. Poulin redirected a pass at the blue line to Agosta, who drove toward the net; Agosta saw her shot saved, but a trailing Poulin put in the rebound.

Canada was outshot 23-13 over 40 minutes, but Szabados stood tall in the paint, withstanding the pressure the Americans applied near her crease.

Penalties proved to be the story in the series’ first two games: In Game 1, Canada surrendered two power play goals in defeat; in Game 2, the team successfully killed off nine penalties in victory.

For two periods, Game 3 followed the script. Canada took three more penalties in the opening period, hampering its ability to go on an extended attack. It allowed a power play goal in the second, and started both the second and third periods on the penalty kill.

The script flipped in the third. Canada dictated play over the final period, earning three power play opportunities of its own and taking that momentum into the short overtime period.

The teams return to the ice on Tuesday, with Game 4 going in Winnipeg.