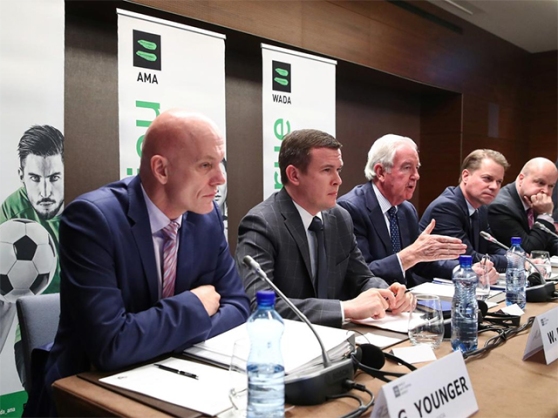 This morning in Lausanne, Switzerland, the World Anti-Doping Agency (WADA) unanimously agreed upon a four year ban for Russia not only from the 2020 Summer and 2022 Winter Olympics, but also for its member sport federations (of which the International Ice Hockey Federation is a part) to ban Russia from participating in or hosting any events between now and 2023.

The ban comes on the heels of continued follow-ups coming from Russia’s 2017 ban (which forced their athletes to compete as “Olympic Athletes From Russia” at the 2018 PyeongChang Games), as there were regular inconsistencies and missing content in the laboratory data handed over to WADA from the Russian Anti-Doping Agency (RUSADA), which was believed to be further tampering of athlete tests and a failure to cooperate with WADA.

This punishment now exceeds the original 2017 ruling, as it not only bars Russia from both a Summer and Winter Olympic Games, but also from global events across nearly all sports, including the FIFA World Cup and Ice Hockey World Championships. RUSADA has been given 21 days to appeal WADA’s decision, which they will almost certainly appeal, which would then send the matter to the Court of Arbitration for Sport for further argument; Russia’s parliament, the Duma, has already noted that an appeal will be filed by RUSADA’s next meeting on 19 December.

The dates in which not only the RUSADA appeal would be decided upon, and when the IIHF would vote on Russia’s standing from a hockey perspective, remains to be seen, but a decision will not be likely until at least the new year, meaning Russia would be unaffected for the upcoming 2020 World Junior Championships in Czechia. Additionally, the IIHF is set to host their annual World Hockey Forum in Moscow starting 13 December, where this topic will certainly be a major point of discussion.

The impact this will have on Russian ice hockey in particular will be massive, with hockey being one of Russia’s most popular sports, if not the most popular sport outright. Both the IIHF and Russian Ice Hockey Federation (RIHF) have yet to comment on this morning’s decision, but IIHF President René Fasel has already noted that while the Executive Committee may accept WADA’s proposal, it will be “impossible” to move events already scheduled for Russia to host, including the 2023 World Championships in Saint Petersburg and the 2023 World Junior Championships in Novosibirsk.

The event hosting aside, the impact to ice hockey will be interesting, as the men’s players have largely been exempt from the doping scandal due to stricter doping rules in place at the professional level, so the question here would be if players could still participate at the World Championships under a neutral banner, similar to the 2018 Olympics (UPDATE 10 DEC: WADA has stated the IOC cannot use the “Olympic Athletes From Russia” banner again, emphasizing neutral athletes must not be seen as representing Russia). Speaking of the Olympics, while a decision has yet to be made on if the NHL will participate in Beijing for the 2022 Winter Games, an absence from the NHL would almost certainly guarantee the Russians another Gold Medal, but like in 2018, this title would always be marked in the history books with an asterisk.

The women’s team will almost certainly bear the biggest brunt of this, as numerous female players were impacted by the previous doping scandal, with eight players banned from Olympic participation for life. Whether these bans would extend to IIHF events or not obviously remains to be seen, but for the Russian women’s team, who as an emerging nation making their way into the “big four” of women’s hockey, alongside Canada, the United States and Finland, this would deal a huge blow to their future prospects. There is also the possibility that any previous results or standings could retroactively change, which could impact their standings in the IIHF World Ranking.

There is still much that remains to be seen from the fallout, but this certainly marks a bombshell moment for international sports, with one of the largest proposed national bans in history on the table. We will keep close to this story as it develops with any relevant updates from WADA, RUSADA or the IIHF.

UPDATE 9 DEC: The RIHF has issued a statement, noting that “The RIHF will accept and will steadily follow any CAS’s decision that will take effect” and “the Russian Ice Hockey Federation will completely adhere to the WADA’s requirements imposed on the athletes in regards to their participation in world championships.” They also note that “the decision on the IIHF Championships allocation is to be made by the International Ice Hockey Federation,” and that “in cooperation with the Russian Olympic Committee, the Russian Ministry of Sport and International Ice Hockey Federation, the RIHF will advocate the interests of “clean” athletes and the RIHF’s right to hold international sports events on the territory of Russia.”