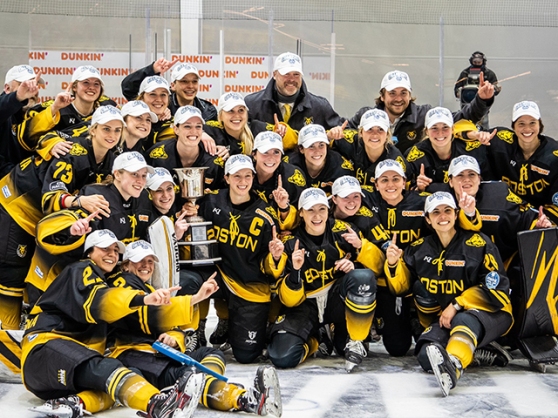 Despite entering the delayed NWHL playoffs as the fourth and final seed, the Boston Pride used unique pandemic circumstances to capitalize on home ice and capture their second Isobel Cup Saturday night, defeating the Minnesota Whitecaps in Boston to win the NWHL championship.

The 2020-21 NWHL season was set to be contained in a bubble in Lake Placid, New York from January 23 to February 5, with a round robin tournament to set the playoffs; however, individual teams began to drop out of the bubble in rapid fashion, forcing the league to suspend the season on February 3, the day before the playoffs were set to begin.

On March 8, the league announced the playoffs would be held over two days at the Warrior Ice Arena in Boston to wrap up the season, but the season was further thrown into doubt when NWHL founder and board member Dani Rylan announced her departure from the league on March 16.

A “rematch” of sorts was set to crown the Isobel Cup winner between Minnesota and Boston, which was to be the 2020 Isobel Cup Final before that game, scheduled for March 13, 2020, was suspended in the early days of the pandemic. Boston easily dispatched the Toronto Six, while Minnesota shut out the Connecticut Whale, respectively, to reach the final.

In the final, despite a stellar performance from Whitecaps keeper Amanda Leveille and a two goal performance from Allie Thunstrom, it was an early Jillian Dempsey tally, helpers from Lexie Laing and Mary Parker, and a late go-ahead power play goal from Taylor Wenczkowski, and a stellar defensive performance that let the Pride hang on for a 4-3 victory on home ice, despite no home crowd to celebrate. With the win, the Pride become the first two-time Isobel Cup champions in NWHL history, following their first title in 2016.

Our congratulations go out to the players, management and fans of the Boston Pride, with those on the roster that have also held the IHLC highlighted in bold: