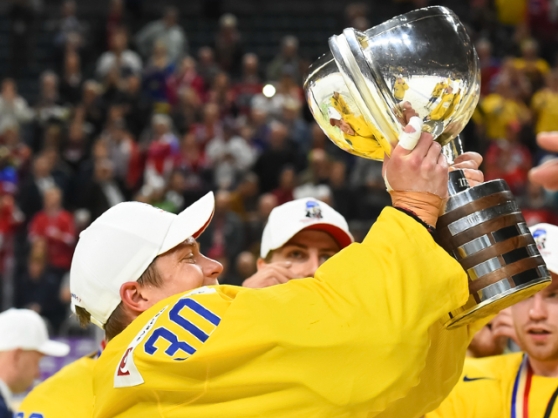 After a season that saw World Champion Swedish goaltender Viktor Fasth celebrate the highest of highs with a second SHL championship, followed by the worst performance by Tre Kronor at the IIHF World Championships since 1937, Fasth today announced his retirement from hockey at the age of 38.

Coming up in the Vänersborgs youth system, Fasth debuted with Växjö Lakers in 2007, spending three seasons in Tier 2 before playing two seasons with AIK in the Swedish Top Division, winning Top Goalie honours in 2011 and 2012. Undrafted in the NHL, Fasth was recruited by the Anaheim Ducks, joining them for two seasons in 2012 before being traded to Edmonton in 2014, spending just one full season with the Oilers. After three years of moderate NHL success, Fasth next joined CSKA Moscow of the KHL in 2015, spending two seasons in Russia before returning to Växjö in 2017. In his second tour with the Lakers, Fasth put up staggering numbers, capturing two SHL titles and Top Goalie honours in 2018 and 2021, his final pro season.

A latecomer to Tre Kronor, Fasth debuted on the national team on the 2010-11 Euro Hockey Tour, debuting at the end of that season at his first of five World Championships (2011, 2012, 2016, 2017, 2021), joining the national team for the EHT in the lead-up for all five tournaments. Fasth captured Silver in his debut season, and was named as tournament MVP after posting a staggering 1.71 goals against average and .946 save percentage in seven games, pitching three shutouts. Six years later, Fasth was part of the tandem with Henrik Lundqvist that captured Gold in Cologne, going 2-2 in four preliminary round games. Fasth made his lone Olympic appearance at the 2018 Games in PyeongChang, starting three of Sweden’s four games, and made his final international appearance at the recently closed 2021 Worlds in Latvia, where Sweden finished a shocking and disappointing ninth, their worst finish in nearly a century.

Over the course of his fourteen year career, Fasth held the IHLC five times in his career, first on the 2011-12 Euro Hockey Tour, with stops at the 2017 Worlds and 2018 Olympics, and his final Kronor coming at the most recent World Championships. We wish Viktor and his family the very best for his retirement and the things to come!