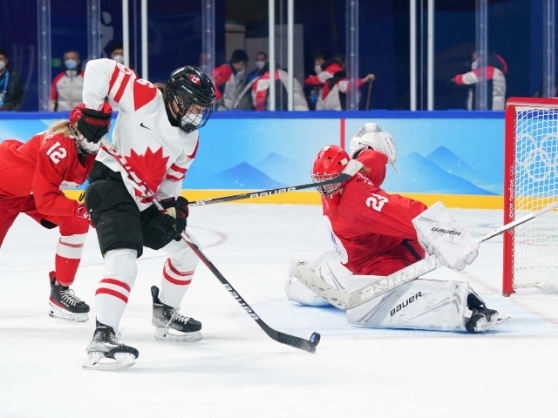 Canada overcame an unusual delay of more than an hour to the start of Monday’s game with the ROC team and marched to a 6-1 victory, staying perfect atop Group A.

It didn’t change the expected outcome. The Canadians, who practiced with masks on in their pre-Olympic bubble, continued their trend of jumping on teams early. They outshot the ROC team 49-12.

“It was a challenging situation and I think there are things we’re gonna learn from it,” said Canada’s Brianne Jenner.

Employing their trademark four-line attack, the Canadians played with relentless desire, although not quite as overpoweringly as in their 12-1 win over Switzerland or 11-1 win over Finland. They dominated in the faceoff circle and broke out with three power play goals. Canada’s PP now tops these Olympics at 41.6 percent.

ROC captain Anna Shokhina scored the first goal ever versus Canada in Russian Olympic women’s hockey history. The Russian women did their best to keep Canada out of the middle of the ice, but it wasn’t enough.

Of the pre-game wait, Alexandra Vafina said: “It wasn’t perfect. This wasn’t usual for us, this delay. We were ready to play right after the warmup, but you have to adjust to what life brings you”

“Canada versus the US in the Olympics is something special, so we’re just excited for the opportunity,” Ryan said.

The Canadians defeated the Americans 3-2 in the 2021 Women’s Worlds final in Calgary on captain Marie-Philip Poulin’s sudden-death tally. Previously, Canada had not won Gold at a Women’s Worlds since 2012. Looking revitalized, the Canadians now seek their first Olympic title since 2014 and fifth all-time.

“We’re really looking forward to playing the US,” said Ambrose. “That’s the next step and the most important game now, so we’re just going to rest up and be ready to go tomorrow.”

The ROC team has lost two straight games after beating Switzerland 5-2 in their Beijing opener. They complete their preliminary round against Finland – Bronze medalists at both the 2018 Olympics and 2021 Women’s Worlds – on Tuesday.

ROC netminder Daria Gredzen got her first Olympic start under tough circumstances. The 17-year-old played half of the third period in a 5-0 loss to the U.S., stopping all 19 shots she faced after starter Maria Sorokina was pulled. Versus Canada, Gredzen, a Biryusa Krasnoyarsk product, acquitted herself well with 30 saves on 34 shots before Sorokina replaced her just past the midway point.

In Canada’s net, Emerance Maschmeyer, a five-time Women’s Worlds medalist who earned Gold in 2021, made her Winter Games debut at age 27. She looked as cool and collected, much like her two shutouts in Calgary in August against the Swiss and Germans.

“Looking at how many of our players are out of the team, it was a very tough game,” said ROC coach Yevgeni Bobariko, who expressed satisfaction with his team’s overall effort.

Nurse, coming off a hat trick against Finland, opened the scoring at 2:09. In the left faceoff circle, she took a Poulin feed from below the goal line and blasted the puck underneath the cross bar.

Just 20 seconds later, Fillier made it 2-0 with a lucky shot that deflected in off Russian defender Nina Pirogova.

ROC generated some pressure with Jocelyne Larocque off for hooking, but Maschmeyer calmly thwarted their power play attempts. The Canadian goalie also barred the door when Valeria Pavlova got a breakaway and deked to the backhand around the 13-minute mark.

“Maybe we lost a puck or two in our skates, but we don’t want to use it as an excuse,” Jenner said. “We wanted to come out and play a good, solid game. There were probably a couple of shifts we’d like to have back, but I think mentally we did a good job adapting.”

In the second period, shots favoured Canada 23-2. Rattray stretched the lead to 3-0, converting a power play rebound at 7:45.

The Canadians just kept coming with more pressure, hemming their opponents in by the midway mark. Ambrose gave Canada a four-goal lead at 10:29 with a rising wrister from the centre point through traffic.

With 2:39 left in the middle frame, Shokhina cut the deficit to 4-1, taking a pass from Vafina and firing a shot that squeezed under Maschmeyer’s blocker-side arm.

“That was a funny moment because Anna Shokhina, who scored, we’re usually not playing on the same line, but she went on the ice with us and then, boom, it’s a scoring chance,” Vafina said. “And she scored, which is good against Canada. You know, Canada and the US, they are the best two teams in the world and to score against (Canada) was a highlight from the game. I wish we could score more, but at least we got one.”

Canada’s power play clicked twice more in the third period. Just 45 seconds in, Jenner set up Johnston to make it 5-0. Jenner found Poulin cross-crease for her first goal of these Olympics at 5:50. Poulin has famously scored in three consecutive Olympic finals, the only player, either female or male, to do so.