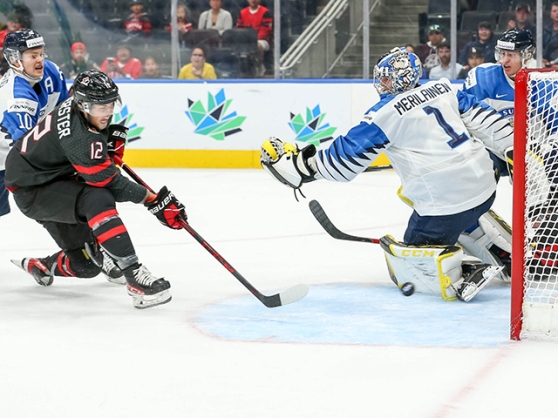 Canada scored three goals on 10 first-period shots en route to a 6-3 victory over rival Finland to stay perfect at Rogers Place and clinch first place in Group A. The result gives the host nation a quarter-final matchup with Switzerland on Wednesday.

The Finns, who finish second in the group with eight points, will take on the loser of the Sweden–Germany preliminary round finale in the quarter-finals.

Coach Dave Cameron’s skaters were far better at putting away their opportunities, attacking the front of the net with their trademark relentlessness. They outshot Finland 37-25. Some undisciplined Canadian play in the third period enabled the Finns to narrow the gap.

Versus Suomi, Canadian captain Mason McTavish set the tempo with a goal and two assists. Connor Bedard and Ridly Greig had a goal and an assist apiece.

McTavish, a 2022 Olympian who played nine games for the Anaheim Ducks last year, tops the tournament in points and goals (7+6=13) and is the current MVP favourite. Bedard (3+4=7), the electrifying 17-year-old phenom pegged to go #1 overall in the next NHL Draft, has at least a point in every game so far this tournament.

For Finland, Joakim Kemell had a goal and an assist. Samuel Helenius and Roby Järventie added singles.

Canadian starting goalie Dylan Garand, who recorded 22 saves, got the better of his Finnish counterpart Leevi Meriläinen, who made 31 stops.

Coach Antti Pennanen’s Finns aspire to improve on last year’s Bronze medal here in Edmonton, while Canada is eager to top the podium again after taking the Silver medal behind the Americans.

“I didn’t think we played our best hockey, but at the end of the day we got the win,” said Nathan Gaucher. “It was an important win. We knew coming into the game Finland had the best power play, so we really wanted to send a message and get it done on the PK.”

The teams went hard at each other from the drop of the puck. When the towering Helenius – back in the lineup after sitting out the 9-3 shellacking of Slovakia – gave Garand a snow shower, a scrum erupted at the Canadian goal crease.

Finland had a 4-0 edge in shots when Othmann opened the scoring on Canada’s first shot at 6:21. Zellweger pivoted at the right point and launched a wrister that the Flint Firebirds forward deflected through Meriläinen. The play was video-reviewed for a high-stick, but the goal stood.

The ice then tilted in Canada’s favour. With Helenius off for slashing, Greig split the Finnish defence on a solo dash and Foerster came crashing in to convert the rebound for a 2-0 lead at 12:14.

After a shift in which the Finns largely hemmed the Canadians in their own end, Bedard gave the host nation a crucial 3-0 lead with 2:41 left in the first.

The on-rushing McTavish’s cross-ice pass made it through Finnish sticks to the Regina Pats superstar on the right side. Bedard’s lightning wrister, exploding off the toe of his stick, blew over Meriläinen’s glove.

“We were out there for about a minute and a half shift,” said Othmann. “We were pretty bagged, and Cormier made a great outlet pass and I stepped on the gas to get off. I didn’t see him shoot, but I heard the ping and I figured it was something special. We’re super-lucky to have him on our team.”

The Finns struck back to make it 3-1 with 57 seconds left in the frame. Helenius enjoyed a little redemption, as Kalle Väisänen centred the puck from behind the net and he took it off his skate before snapping it over Garand’s glove.

Hopes of a Finnish comeback were quickly quashed in the second period. Greig barged to the net to bang in a loose puck at 0:31 when Zellweger’s drive from the blue line bounced off Meriläinen’s glove.

Nearing the six-minute mark, the Finnish goalie denied Kent Johnson on a partial break set up by Foerster’s stretch pass. Meriläinen also said no to William Dufour twice, first on a shorthanded breakaway and again in tight a few minutes later. But a big Finnish comeback just wasn’t in the cards this evening.

On the power play, McTavish’s vicious one-timer from the right faceoff circle went high stick side for a 5-1 Canadian lead at 16:17.

In the final stanza, Kemell cut the deficit to 5-2 on the power play with his third tournament goal at 3:07. He tipped Topi Niemelä’s centre point blast past Garand. A Canadian coach’s challenge spawned a lengthy review, but the video evidence was inconclusive in terms of the puck’s having exited the playing surface, and the goal stood.

Things got chippier down the stretch. With Donovan Sebrango halfway through serving a high-sticking minor, Will Cuylle stuck his knee out on Finnish energy forward Juuso Mäenpää at the Canadian blue line and took a five-minute major and game misconduct.

However, the Finnish power play, which clicked a whopping five times against Slovakia, went bone-dry on this key comeback chance, generating nothing of consequence after the 5-on-3 portion expired. The Canadians blocked shots and took away lanes to complete the kill.

“Of course the power plays in the third also helped us, but their PK was very good,” Kemell said. “They blocked shots and were aggressive, and we didn’t get enough pucks on net. They played a physical game, but I think we matched them as well.”

Another late Finnish two-man advantage brought Pennanen’s team within two goals. Järventie connected with a one-timer at 16:23. However, Dufour sealed the deal with an empty-netter at 18:13.

The win improves Canada’s all-time World Junior record versus Finland to 25 wins, six ties, and nine losses. But both these U20 powerhouses care far more about winning their next three playoff games in Edmonton than the dusty history books.