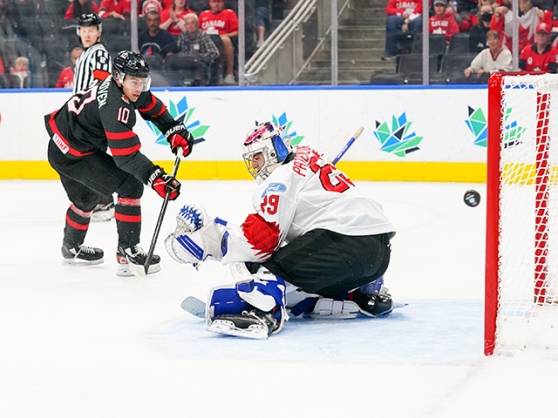 Propelled by a four-goal first period, Canada defeated Switzerland 6-3 in Thursday’s marquee quarter-final in front of a happy Rogers Place crowd. Coach Dave Cameron’s team will face either the Finns or the Czechs in the semi-finals on Friday.

Versus coach Marco Bayer’s Swiss squad, the powerful Canadians generally lived up to their advance billing, apart from allowing more goals than they’d like. After settling for the Silver medal in 2021, they’re now two wins away from a record-setting 19th World Junior Gold medal. But there’s still lots of work left to do.

Logan Stankoven and Tyson Foerster led the way for Canada with two goals and an assist apiece. Jack Thompson, Nathan Gaucher and Will Cuylle also scored for Canada, while Ronan Seeley chipped in a pair of helpers. Captain Mason McTavish increased his tournament scoring lead (7+7=14) with an assist.

“We weren’t as sharp as we were against Finland,” Gaucher said. “But we got the win and we’re headed to the semi-final. Maybe because it was our fifth game, I’m not sure, but we played a great game when we had to and got the goals when we needed it.”

Canada outshot Switzerland 41-26. Swiss starting goalie Noah Patenaude was yanked late in the first period in favour of Kevin Pasche after allowing four goals on nine shots. Dylan Garand went the distance between the Canadian pipes for his fourth win.

“We played really well,” Knak said. “We showed we can compete with those guys. They’re such a good offensive team, but our offence played well also. Pasche was really good in the goal, and we were always in the game.”

Just 1:07 in, Foerster got the Canadian party started. Taking a pass from Seeley, Stankoven came in over the offensive blue line, and, although surrounded by three defenders, found the Barrie Colts ace in the right faceoff circle. He zinged it home high on the glove side.

“I’m pretty sure Stank threw it over to me and I had an open net,” Foerster said. “I just put it right in the middle.”

The plucky Swiss answered right back at 2:21, as Knak smartly tipped Brian Zanetti’s point shot past a surprised Garand.

Switzerland settled into a hopeful groove for a while after the equalizer, denying Canada opportunities with staunch defensive work. On a mid-period neutral zone turnover, Joshua Fahrni burst in to test Garand from the left faceoff dot with a quick release. And when Stankoven got in behind the Swiss defence about a minute later, he shot high and wide.

Applying pressure in the Swiss zone, Canada caught a couple of breaks on its 2-1 marker at 12:31. First, Swiss forward Mats Alge was hobbled after blocking a big Jack Thompson drive from the line. Second, when Seeley put the puck off defenceman Maximilan Streule’s skate, it deflected right to Thompson, who fired it into the open side as Patenaude lunged across in vain.

The intensity picked up, and Canadian blueliner Ethan Del Mastro drew the ire of the Swiss with a couple of big bodychecks.

At 14:32, Stankoven pounced on a Nick Meile giveaway at the Swiss blue line. The 2022 CHL Player of the Year with the Kamloops Blazers snapped a shot that hit the intersection of the cross bar and post, and he followed up to backhand the rebound in.

Gaucher made it 4-1 at 17:01. Patenaude lost track of Desnoyers’ initial shot, which nearly slipped through his pads, and the Canadian fourth-liner followed up to convert the rebound.

The Swiss got a little positive spark with 0:08 remaining in the period. Fahrni grabbed the puck on the forecheck behind the Canadian goal line and flung it out front to Biasca, who went top shelf on Garand to cut the deficit to 4-2.

That scoring play reflected the fighting spirit Biasca expressed in a pre-game interview with hockeyfans.ch: “Everybody is beatable in hockey. Nobody believes that we even have a chance. But the team knows that we have it and that we will seize it.”

At 4:20, Cuylle stretched the lead to 5-2. Olen Zellweger found him cruising into the left faceoff circle, and he beat Pasche on the short side.

Biasca’s battle level remained high. He gobbled up a turnover in the Canadian zone and whipped the puck past Garand’s blocker to make it 5-3 with his team-leading fourth goal of these World Juniors at 7:51.

“The pressure wasn’t on us,” Knak emphasized. “We could play freely, which was a good thing. We took that as motivation because nobody thought we had any chance.”

Canada just kept plugging away, despite not adding to its lead. In the third period, Connor Bedard nearly got on the board when McTavish set up him alone in front, but even though the puck squeezed through Pasche’s pads, Despont was there at the goal line to help keep it out, and the goalie smothered it.

Pasche came out for the sixth attacker in the dying minutes, enabling Stankoven to add an empty-netter at 18:51.

Zellweger praised Stankoven: “He played great. It was great to see him score. He was awesome, a well deserved player-of-the-game honour, for sure. He’s got super quick feet and hands, and he’s a really smart player. He meshes well on that line with Foerster and (Kent) Johnson.”

Gaucher added: “We don’t know who we’re playing yet, so we’ll start preparing when we know that. But whoever it is, we’ll be ready Friday. We’re going for a Gold medal.”

Canada’s Ridly Greig, who has impressed offensively so far in Edmonton (3+3=6), had to leave the game in the first period after taking a hit from Vincent Despont. His status for the semi-finals is unconfirmed.

Canada’s perfect record against Switzerland at the World Juniors now sits at 25-0. While Swiss hockey has come a long way with exploits like the 2013 and 2018 Silver medals at the men’s Worlds, a U20 win someday will be a major stepping stone for the Central European nation.